Interview with Dongyi Wu, one of the winners of PREZIOSA YOUNG 2020

I interviewed Dongyi Wu, one of the seven winners of Preziosa Young 2020, the international contest organised by Le Arti Orafe since 2008, dedicated to emerging talents of the contemporary jewellery scene.
Her pieces will be shown during the Florence Jewellery Week 2020 (Florence, 28.05 – 4.06), together with the jewels by the other winners (Elwy Schutten, Chia-Hsien Lin, Marie Masson, Jess Tolbert, Rachael Colley, Zihan Yang) in the “Galleria del Palazzo“, the Coveri‘s art gallery located along the Arno river. 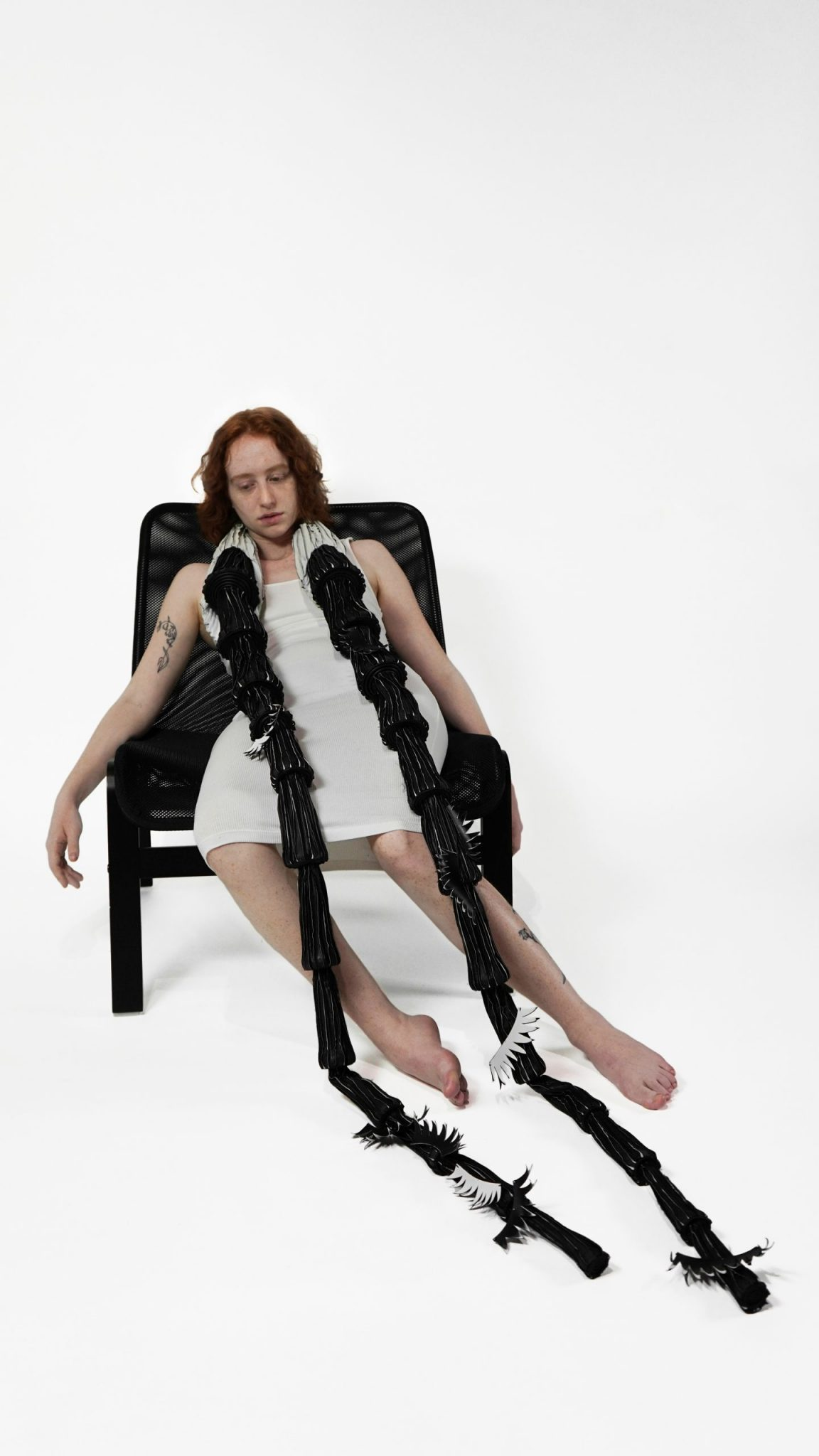 When dealing with contemporary goldsmith artists or jewellery designers, the first curiosity is to know how he/she has chosen the jewel as the primary medium of his/her artistic research. Why jewellery in particular and what was your training in this field?

DONGYI WU: My artworks span across contemporary jewellery, wearable art, sculpture, and conceptual installation, but jewellery is the primary medium of my artistic research. I love Jewellery because of the relationship it creates between objects and human bodies. In other words, I consider jewellery as the media to bring human bodies into art. I prefer to consider jewellery as a unique art form that is essential to me, and that’s why jewellery is so important to my artistic practice.

I hold my Bachelor’s degree in jewellery design at the Beijing Institute of Fashion Technology in China and my master’s degree in metal and jewellery design at Rochester Institute of Technology in the United States. I learned my metalsmith skills and critical thinking from these two learning experiences, especially in RIT. Furthermore, there is another training experience not really related to metal and jewellery, which influenced my art: I hold my Dual degree in Fashion Design and Engineering, where I learned about fabrics, sewing techniques, and fashion history.

Your jewels have a surrealist flavour. You let free imagination and dreams guide you in designing the object to wear. Would you tell us how the series “Tired” and “Access to unknown worlds” were born?

DONGYI WU: The inspiration for the “Tired” series comes from a small and interesting moment in my life, a tired afternoon. When I took my pen and sketchbook to figure out what to do next, I was very sleepy. I felt my eyes and eyelashes became so heavy and almost falling off from my eyes. To picture that feeling, the spherical eyes are transformed into the cylindrical shape by the influence of gravity pressure. The spiral circles made with black rubber are placed on the bottom of the cylinder, which means the pupil in the eyes. People sometimes simplify the texture of iris into lines pattern, which inspired me to create the special texture by sewing the gloves and fabric together. When sewing, I left edges to expose the white back of the gloves, which imitate the gap between the lines’ pattern on the iris.

The idea of “Access to unknown world” had stayed in my mind for years. I was fascinated by the complexity and contradiction of emotions in the dreamlands, I mean that sometimes I felt worried but excited in dreams. I had looked for the specific images that could express that feeling. Inspired by the animal shapes, typical elements of our imagination, I selected pig and zebra as the main ones. I think pigs are domesticated animals, while zebras are wild, so their combination can be seen as the symbol of the complexity and contradiction of our emotions. For the same reason, I designed the base decorated with the spiral texture that seems to guide the animals to the dreamland under the power of gravity. Influenced by that, the animal forms are shaped to absurd and surreal images: when the zebra’s body come to one side, the pig’s head is appearing on the other one. 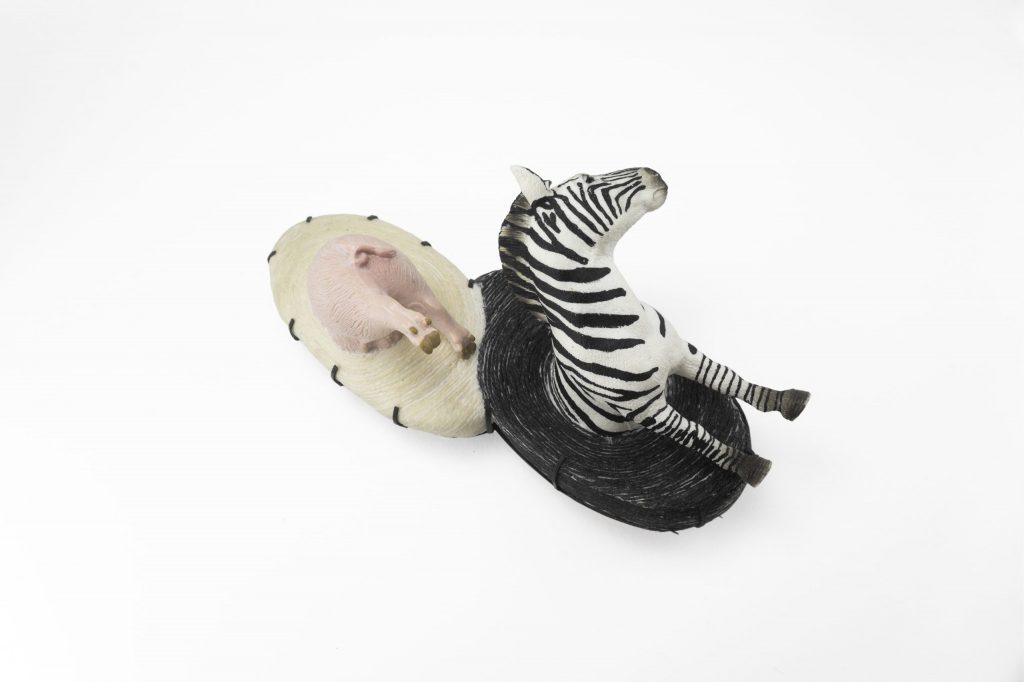 In the “Tired” series I found the use of gloves very interesting, because they give back that exactly sensation of enveloping warmth that one feels when falling asleep, as well as the shocking image of the eyes protruding from their sockets! What other materials do you use and how do you work them?

DONGYI WU: Except for gloves and metal, I work with different alternative materials, such as plastic, rubber, textile, fabric, and also found objects like toys, rubber bands, cardboard, and aluminium cans. Every time before I start my project, I do researches to find the materials that fit my concept. I explained to my students that each material has its “own personality,” which we have to “respect” and “understand.” I consider the material exploration as part of my conceptual process. Depending on the concept, I sometimes need more exploration to reshape, reconstruct the materials. It feels like an ever-new adventure for me: there are so many possibilities behind the materials. 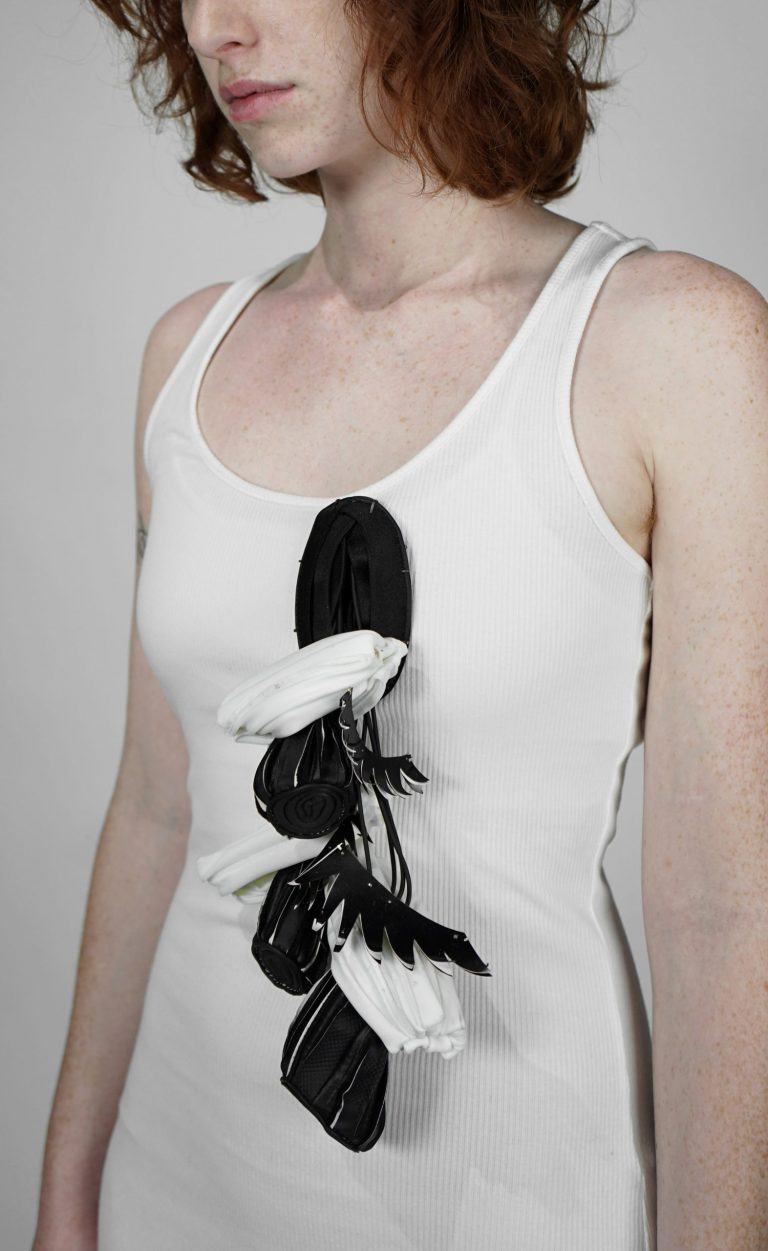 Is there an artist or an artistic tendency that has inspired or influenced you particularly?

DONGYI WU: I was influenced by some surreal artists like Giorgio De Chirico and René Magritte. Especially, I have been inspired by the feeling of strangeness and mystery they conveyed through silent circumstances in their paintings. Another artist who impressed me deeply was Eva Hesse: I like the way she combined organic forms with a sense of minimalism. She inspired me to find a way to balance the narrative and abstract elements in my artworks. 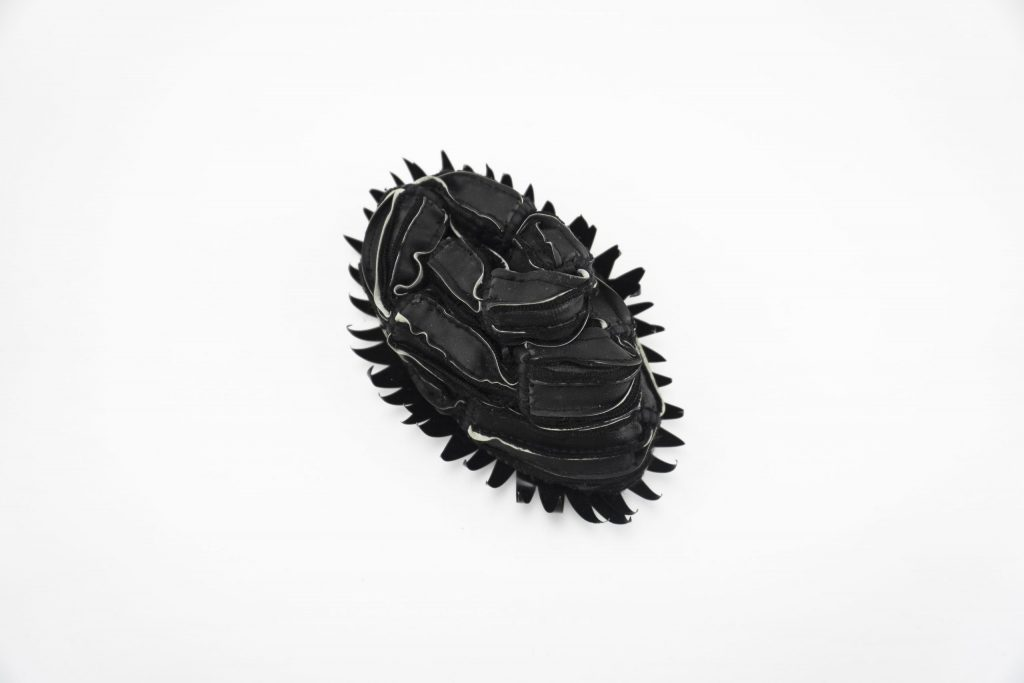