Carla Riccoboni guest of the FJW2020

The Italian jewellery designer Carla Riccoboni will be one of the main guests of the Florence Jewellery Week 2020, a cultural event organized by Le Arti Orafe Jewellery School and completely devoted to contemporary body decoration.
It will take place from 28th May to 4th June, located around the city, in historic buildings and art galleries. Particularly, Riccoboni’s jewels will be displayed in a solo exhibition in the Cartavetra Gallery in Via Maggio. 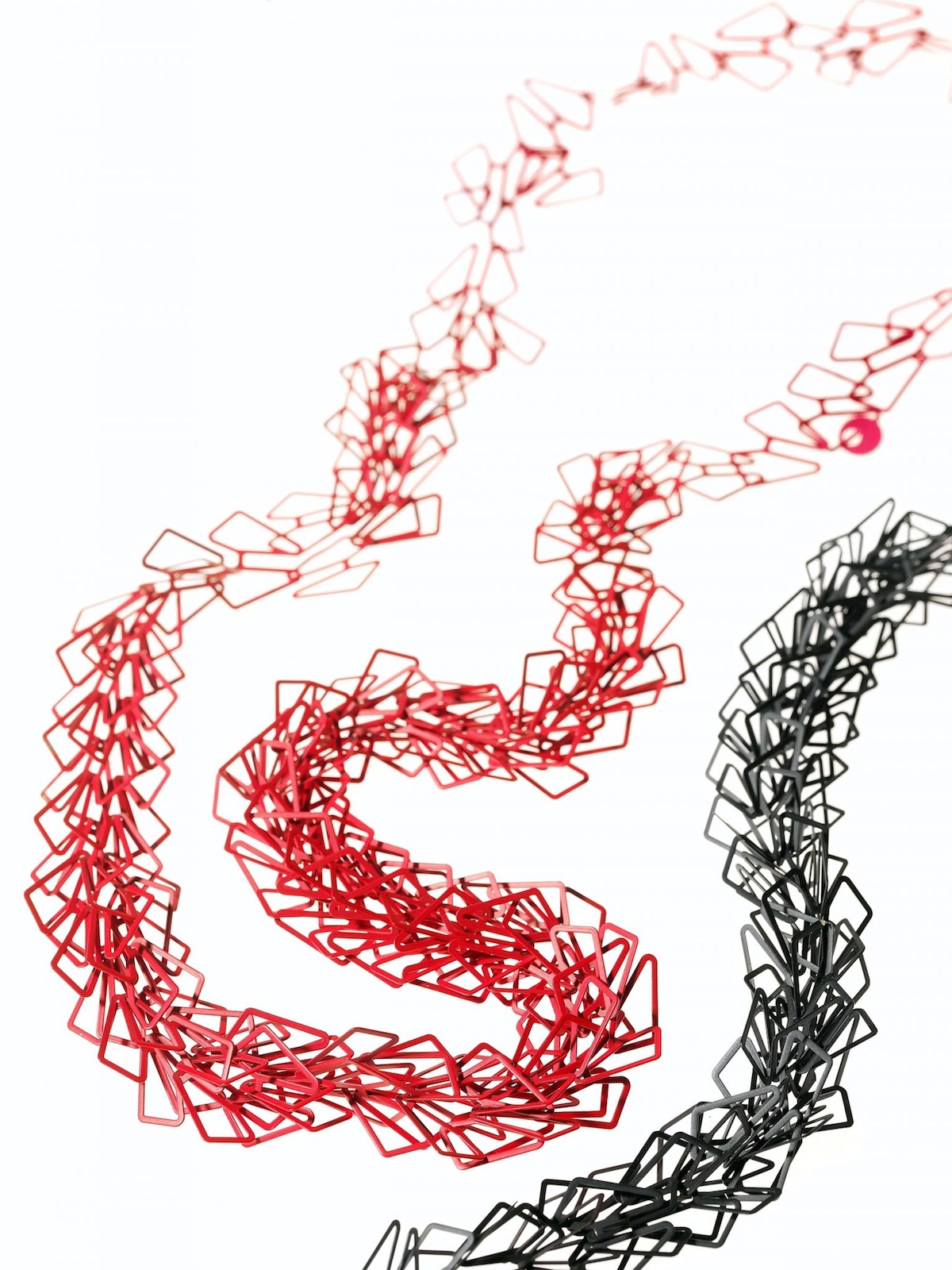 I had the pleasure of asking Carla about her work:

You are a goldsmith and a designer, an historical self-producer of small series jewellery since the 80s. Your mark is the sequence of the same module, repeated in order to form chains. In the “Alphabet” series you used single elements as they were letters, studying the linguistic value of the image in an interdisciplinary vision. Do you think that art jewellery could be considered as a potential and alternative form of communication?

CARLA RICCOBONI: Yes, without a doubt, in my opinion. I hope to communicate an emotion through jewellery and then the interest for a story. A friend of mine who lives on the Asiago plateau brought me a strange object of quadrangular stone form, found in an isolated place in the mountains by his father. The smooth shape adhered perfectly to the palm of the hand and the slightly curved tips found a perfect match with the base of the fingers. The object was very simple, very beautiful, very unusual. I was pleased to hold it. It excited me… I then discovered that it was an object dating back more than 3000 years ago, a feminine, stylized form, probably ritual. A square, an object, a sign, which has projected me into a remote and mysterious story… 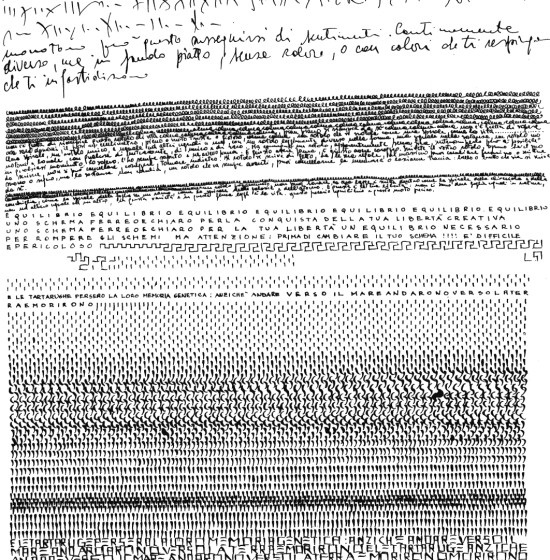 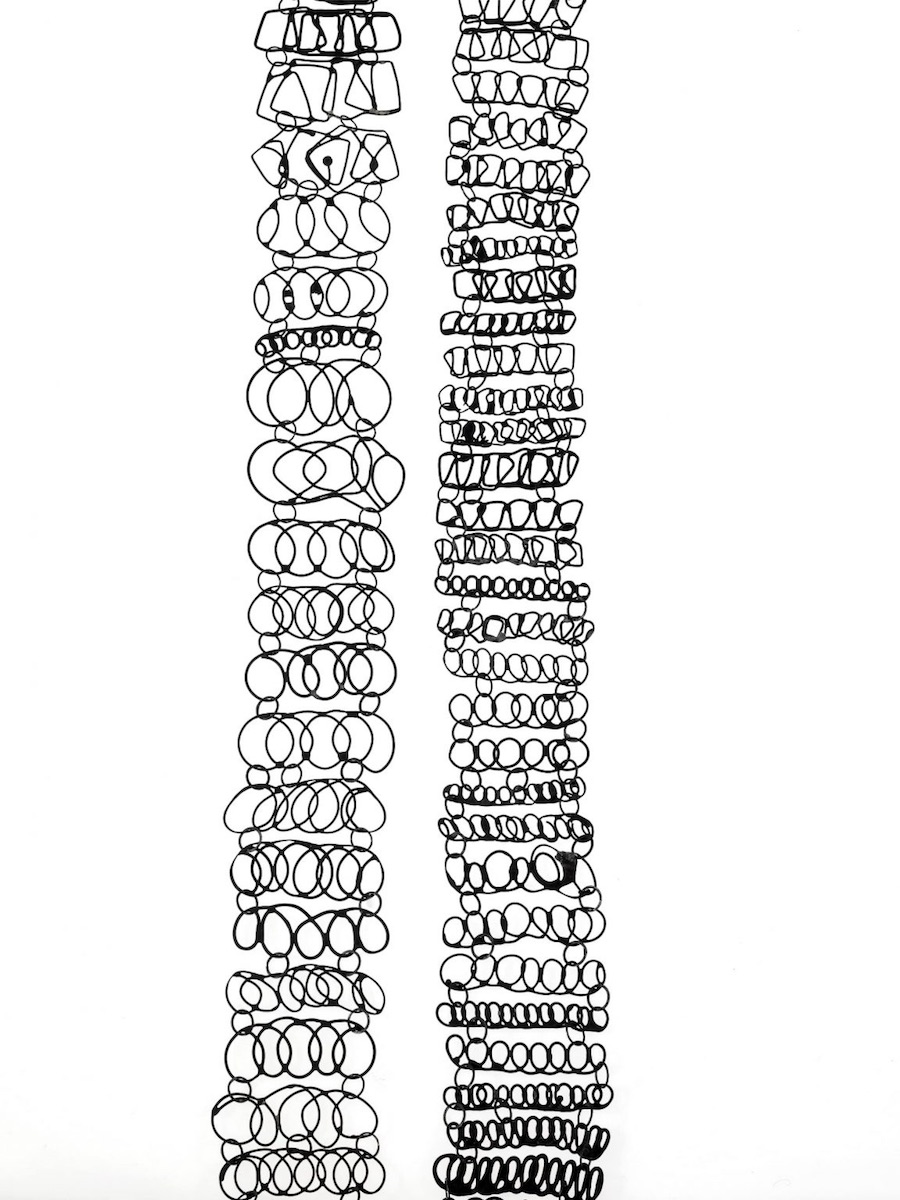 In my notebooks the sign was born as graphic elaboration of a noise, a sound, a word: a kind of automatic writing that, without intention or project, has gradually generated more interesting, more “dense” images. Later, it came ROTOLO, a work of visual poetry that documents the stages of my creative process, my daily emotions, the amazement in discovering “beauty” in every aspect of reality. 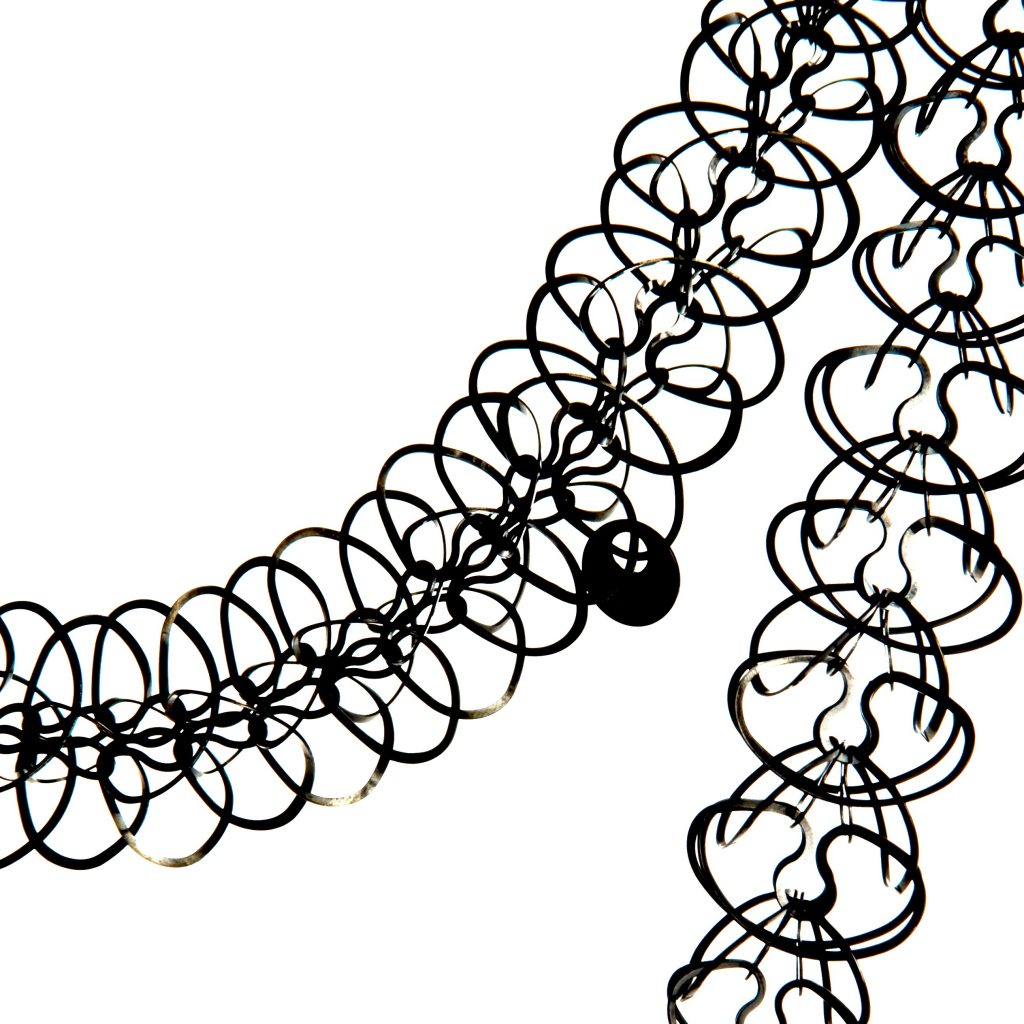 It was a great test of courage to separate myself from these adorable objects and decide to put them in another context. Usually it is tempting to keep them as they are, instead I wanted to give them another life, reuse them by creating something new. They are all elements that have had their own history, have been used, have signs, sometimes they are broken.
The precious stones that I used are mainly stones with inclusions because they convey more the feeling of natural stone with its own story too. Large and coloured stones, fairytale stones.”

The ‘sign-module’ of the Alphabet chains, on the other hand, is a geometric element that defines a system of chains. Changing the shape of the module the shape of the chain changes too. The modules, thanks to a central cut, can be coupled in pairs without welding. Their different shapes, named with the letters of the Greek alphabet, allow to build homogeneous or inhomogeneous chain sequences with the richness and variety of alphabetical combinations. It is a study on multiplicity, on the variation possibilities of the same shape. An imaginary, open, practically infinite alphabet that does not want to convey a linguistic message, but only the beauty that comes from the combinatorial possibility of a few elements, a process that takes place in many aspects of nature.

In the latest Madreforme series, the sign is charged with a collective memory. Memory of a territory: the goldsmith district of Vicenza; memory of an obsolete technique: the industrial printed matter; memory of a repertoire of shapes patiently engraved by hand in the “creators” (the basic equipment for making the molds). They are symbols, archetypes, religious motifs, natural forms, animals, etc., which until the last century were very popular and understandable, because linked to important events, to the stages of the life cycle. These symbolic meanings within a century are being lost. I reproduced them as imprints, manually printed on thin plates of precious metal. I have imprinted flowers, hearts and many other shapes in a free and asystematic way as textures, as surfaces characterization, which maintain or confuse the traces of history. A new material for contemporary jewellery, which “physically” contains the memories of the past. A material that I use as opposed to the artificial materials of our era, such as in the Double brooches. A desire to transmit, through beauty, memory and humanity, especially in this time of coronavirus. 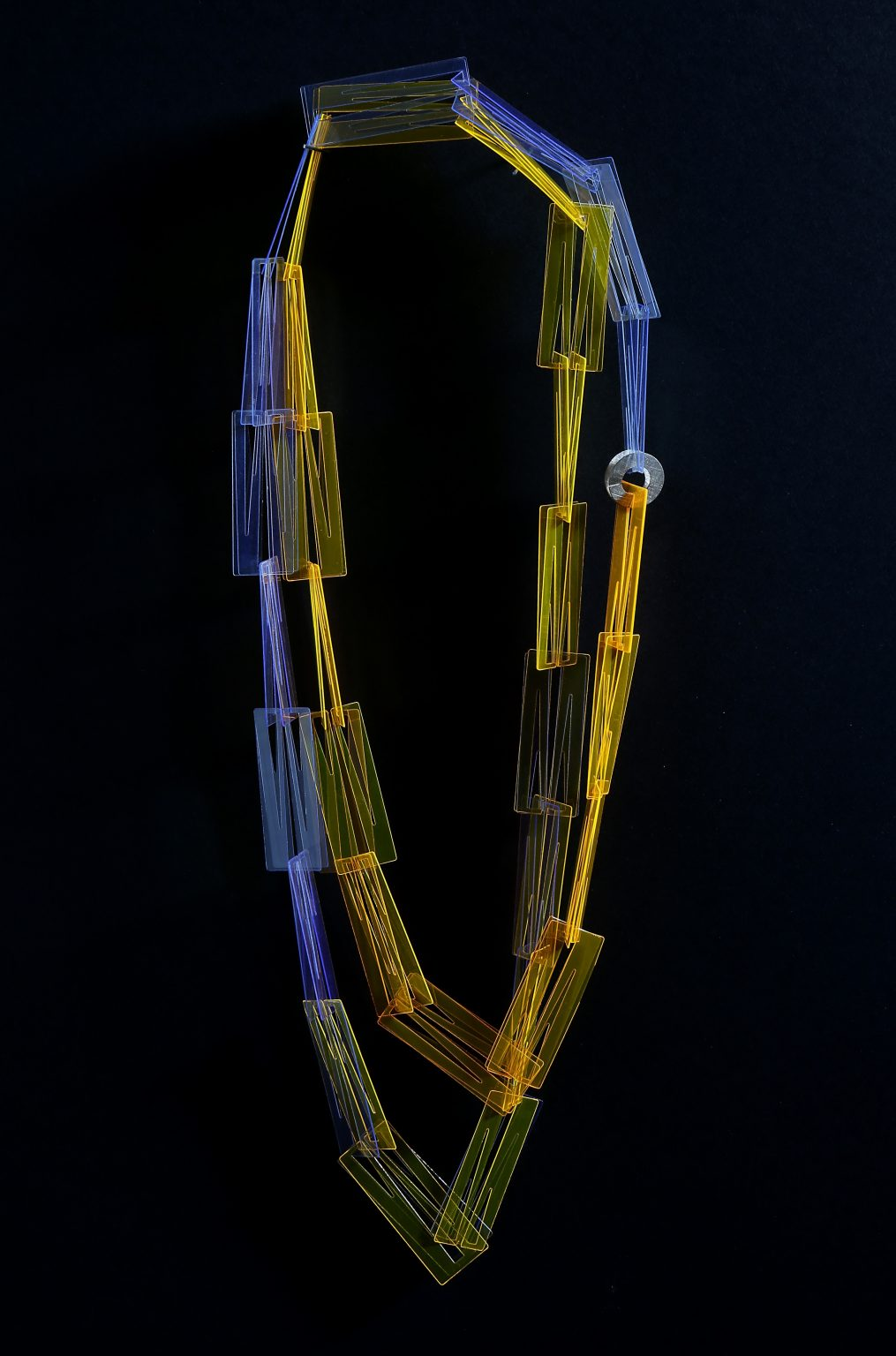 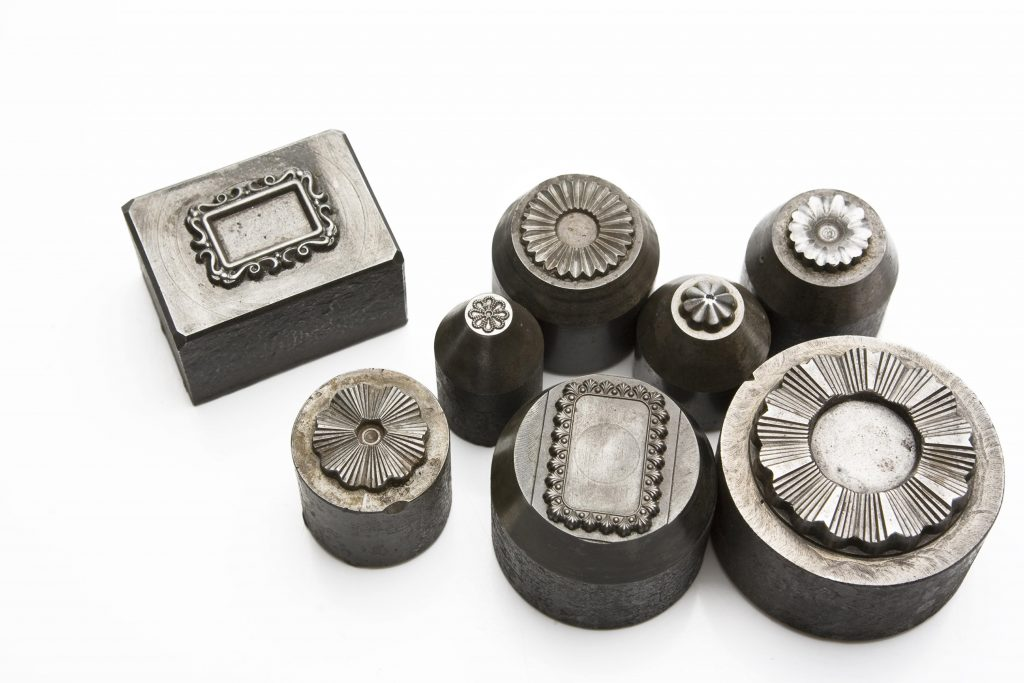 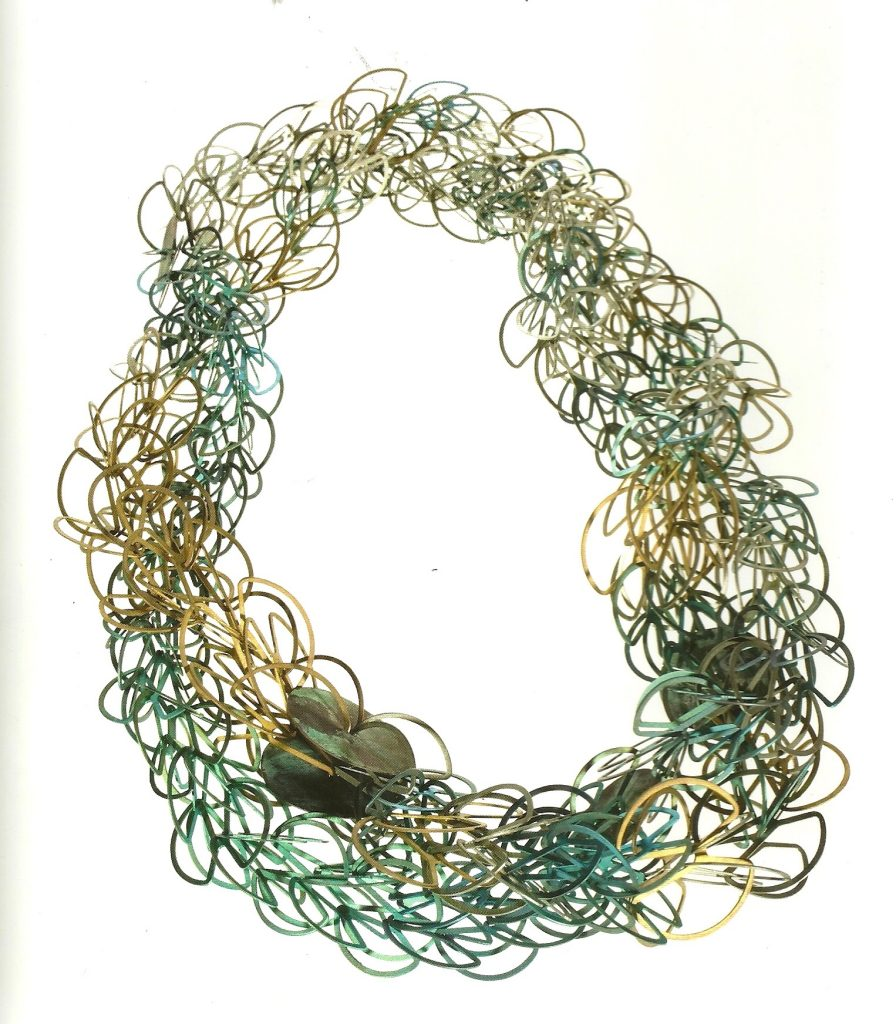 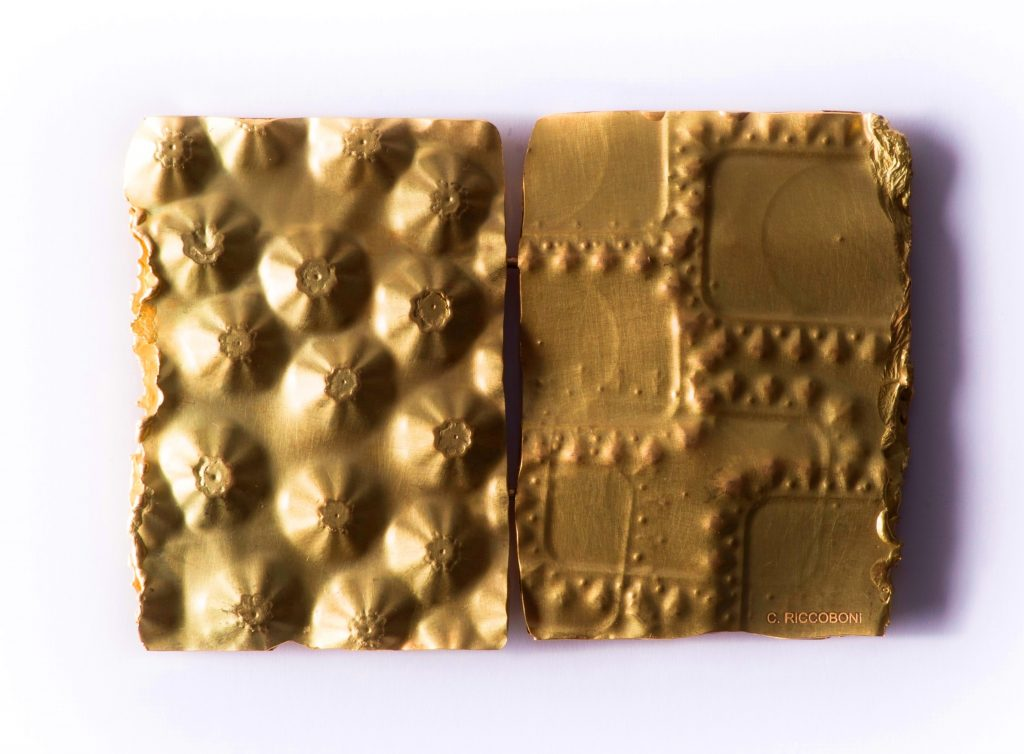