iNACARME! An obsession by mother of pearl 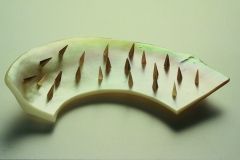 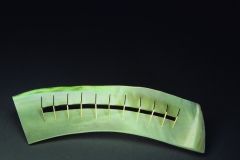 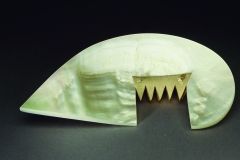 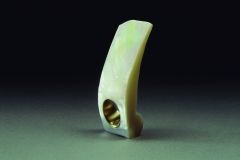 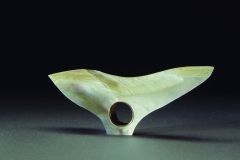 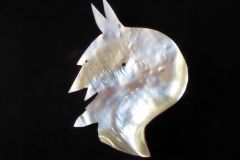 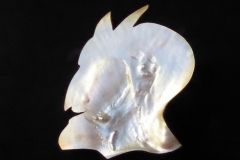 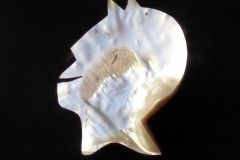 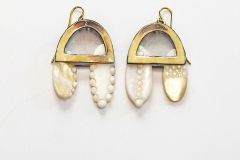 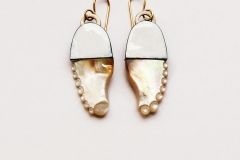 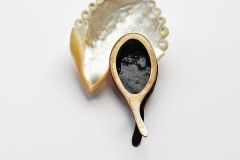 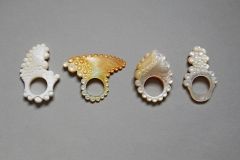 There is a material which they are both working with and fascinated by: MOTHER OF PEARL or like the Spanish say: NÁCAR!
In the exhibition ¡NÁCARME! in Florence Danni and Tasso will present a variation of their work made by different generations in different periods, with their own view on the material mother of pearl. “A material which has an impressive beauty – it seems not to be possible to make something “ugly” out of it. “Tasso started working with organic material in the 80´s, first with bones and later on with mother of pearl. He ordered a shell with the sonorous name: “Meleagrina Margaritifera“. When the giant shell arrived and lay in all its glory in front of him, Tasso was unable to use any tools to work on it. That was the beginning of his “big shell” project.
After a few weeks of daily “communication” with the beautiful piece Tasso made six strokes with a felt pen and divided the shell into six pieces, from those he developed four brooches and two rings. Immediately Tasso bought four new shells which were grinning on him like devils so finally the devil masks have been created.
Danni´s so to speak obsession for mother of pearl started during her studies in Idar-Oberstein, when she was looking for a pearl necklace – not a classical one. She wanted to do one on her own. Visiting all the gemstone shops in Idar-Oberstein she found a beautiful shell: “Pinctada Maxima” – from which Danni developed a pearl necklace, a chain made out of many oval rings cutting out of the material.
In her thesis entitled with “intuition”, Danni worked her way, as it were, through the material. She re-interpreted the concept of “pearls” by alluding to them will still, however, retaining a connection to the material itself. The result was, in particular, to accentuate the visual and haptic qualities of mother of pearl. In her new series “organ” she was shaping forms out of mother of pearl inspired by human organs. She mirrored a part of the piece, which is made out of galalith, a milk stone, a material which has been used in the art deco era. Danni is fascinated by the variety of the material, its luster, the sensitivity and brittleness. “
(Text by Authors)

Tasso Mattar studied sociology at the University of Cologne (1969-75) and jewellery design at the University of Applied Arts at Pforzheim (1975- 79).
He was well noted for his thematical exhibitions. We remember his bone exhibition “jewellery in a butchers” 1986, which became a legendary jewellery event. This presentation of the “precious” in the “trivial world” is a model of Mattars special aesthetical approach which includes everyday objects as well as every day life. His artwork from bone, concrete, soapstone, amber, granite etc. are collected by museums and private collections. He directed workshops in Singapore, Israel, Finland, France, Switzerland, Germany and Luxembourg. He lives and works in a small village in Spain: Artà/Mallorca.