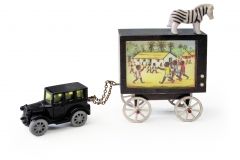 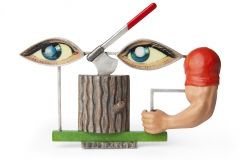 Xavier Monclús lives and works as jewellery artist in Menorca, Spain. Born in 1966 in Barcelona he studies jewellery at the Escola Massana at his place of birth. He is well known for his playful, toy like jewellery pieces, that push the limitations of wearability and feature an infantile aesthetics behind which we can always find a deeper sense. Appropriated images can be found in new, surreal contexts. In his later work he is focusing more on geometric shapes and textures, never leaving the figurative world. His activities as a lecturer and curator as well as his many international exhibitions bring him and his works all over the world.