PREZIOSA YOUNG 2020 exhibition: the aims, the display, and the next locations 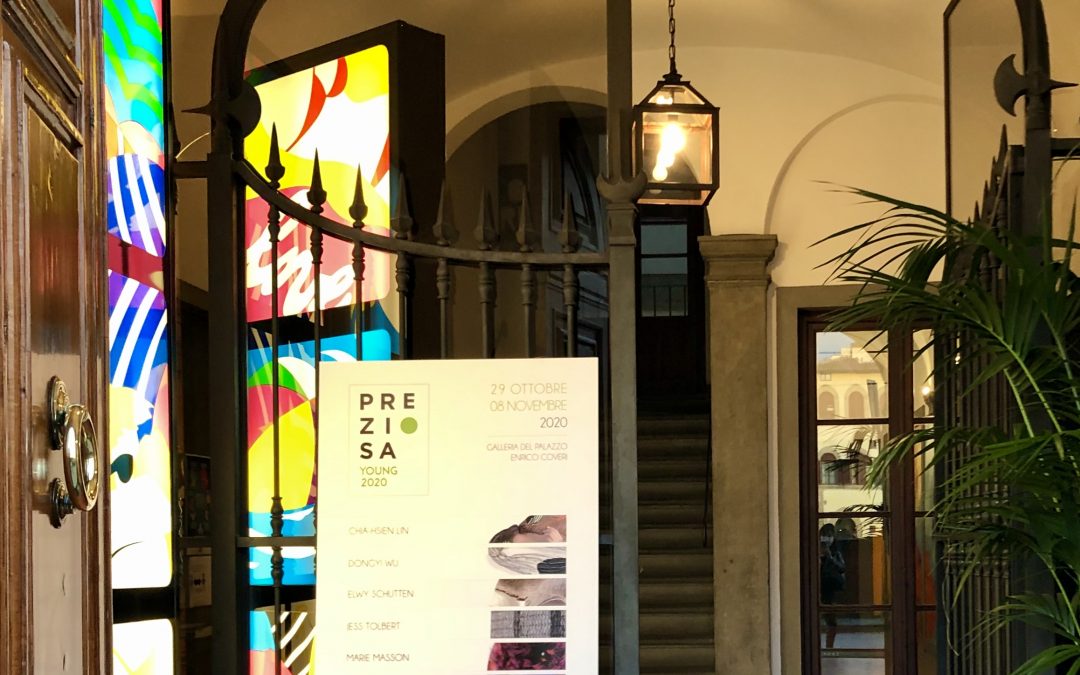 On 29th October PREZIOSA YOUNG 2020 opened at the Galleria del Palazzo Coveri in Florence. This travelling exhibition was born from an international competition conceived, organized and managed by LAO – Le Arti Orafe Jewellery School. Since 2008, that contest has the aim of promoting the emerging contemporary jewellery designers, rewarding their creative talent. 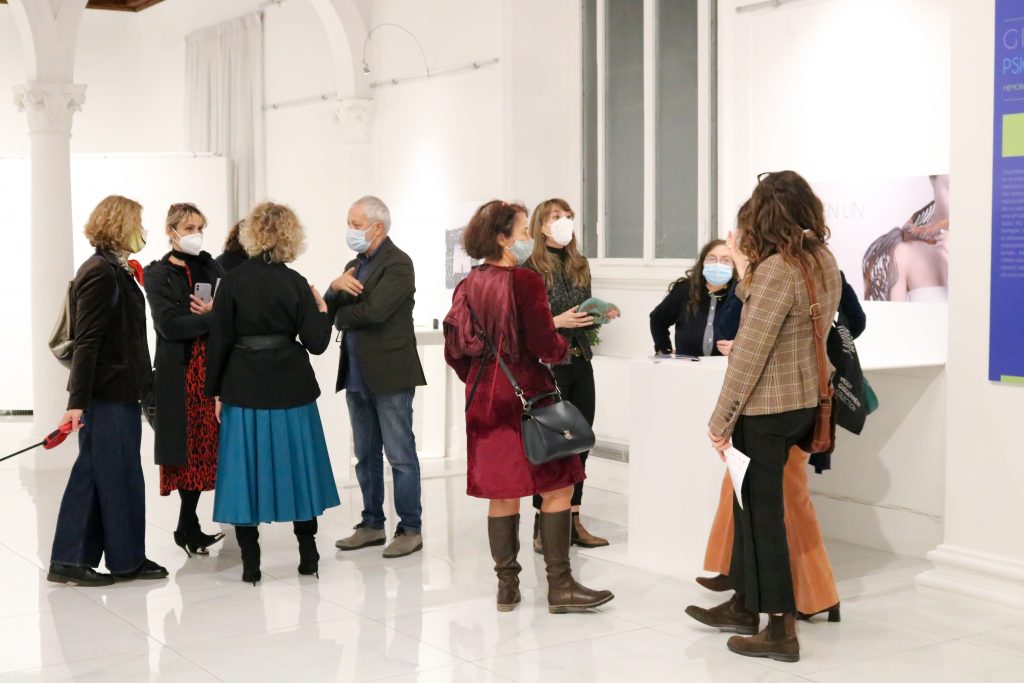 For each edition, young goldsmiths, designers and artists under 35 years old are invited to present a project that illustrates the work in which they are currently involved. Their work is examined by an international jury composed by experts of the field, such as critics, historians, curators, goldsmiths-artists and teachers. This year, Giovanni Corvaja, Eugenia Gadaleta, Kazumi Nagano, Cóilín O’Dubhghaill, Renzo Pasquale, Carla Riccoboni, and Sam Tho Duong have selected 7 winners from 147 applications received from all over the world: Chia-Hsien Lin, Dongyi Wu, Zihan Yang, Elwy Schutten, Marie Masson, Rachael Colley, and Jess Tolbert. 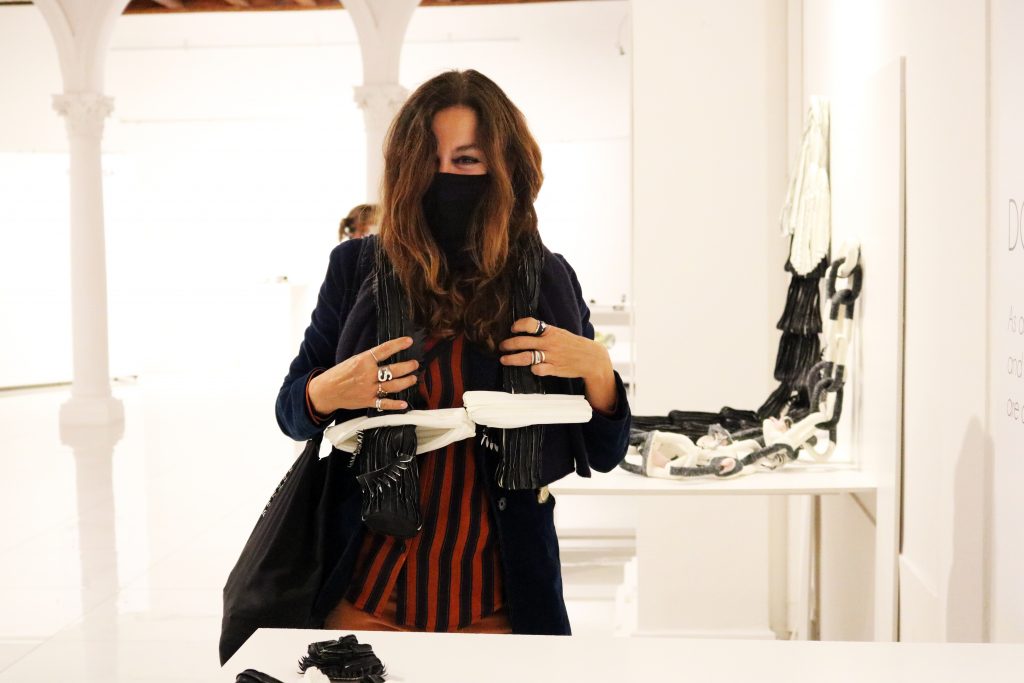 For each edition, the selected artists also have the opportunity to compete for two special prizes: a three-month stay in Florence, guest of the school as “artist in residence”, and a free exhibition space at the Munich fair Inorghenta2021 (INHORGENTA PRIZE), won this year by Zihan Yang.
During the period spent in Florence, the recipient of the LAO SPECIAL PRIZE undertakes to create a series that will be presented on the occasion of a dedicated exhibition. However, due to the Covid-19 restrictions, this year it has not been possible for the school to provide the residency.
Furthermore, the PREZIOSA PRIZE rewards all the selected artists with the publication of a catalogue with critical texts, biographies, contributions by the artists, and high resolution images (the catalogue can be purchased at the price of €10,00 by writing to info@artiorafe.it). 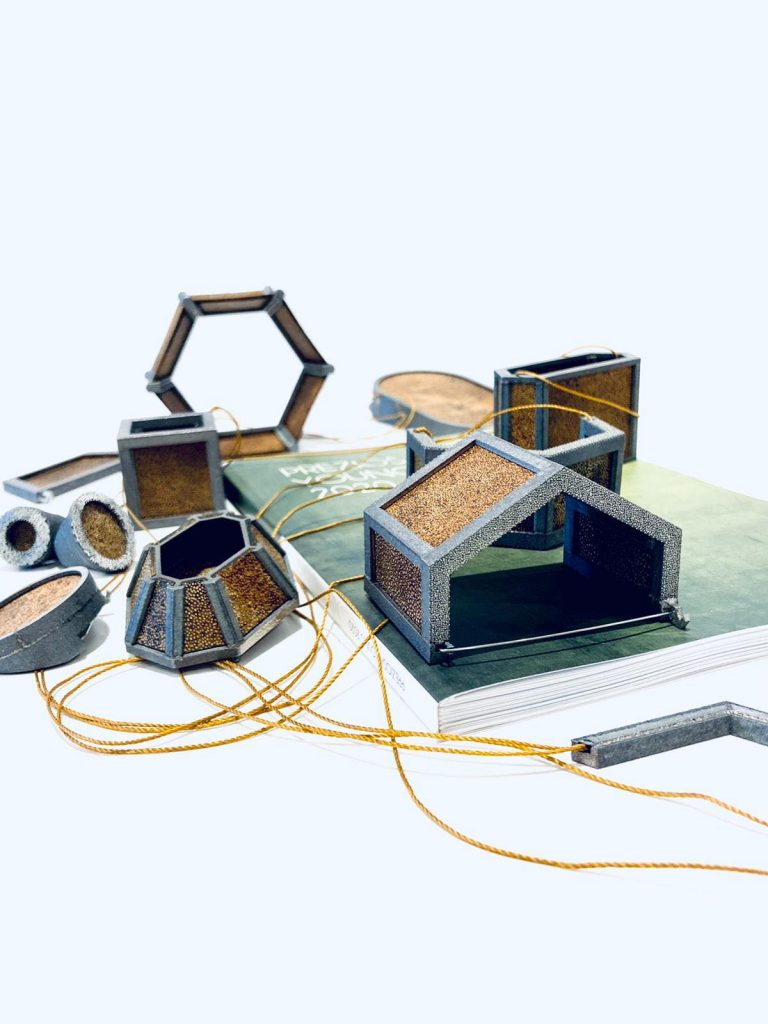 As for the past edition, once again the winners are awarded with a travelling exhibition, which will leave Florence for Barcelona next year, hosted from 13th January to 3rd February by the Hannah Gallery. From 12th to 28th February, PREZIOSA YOUNG 2020 will be open to visitors in Berlin, at the Atelier Martina Dempf, and lastly in Padua, in the frescoed rooms of the Oratory of San Rocco. 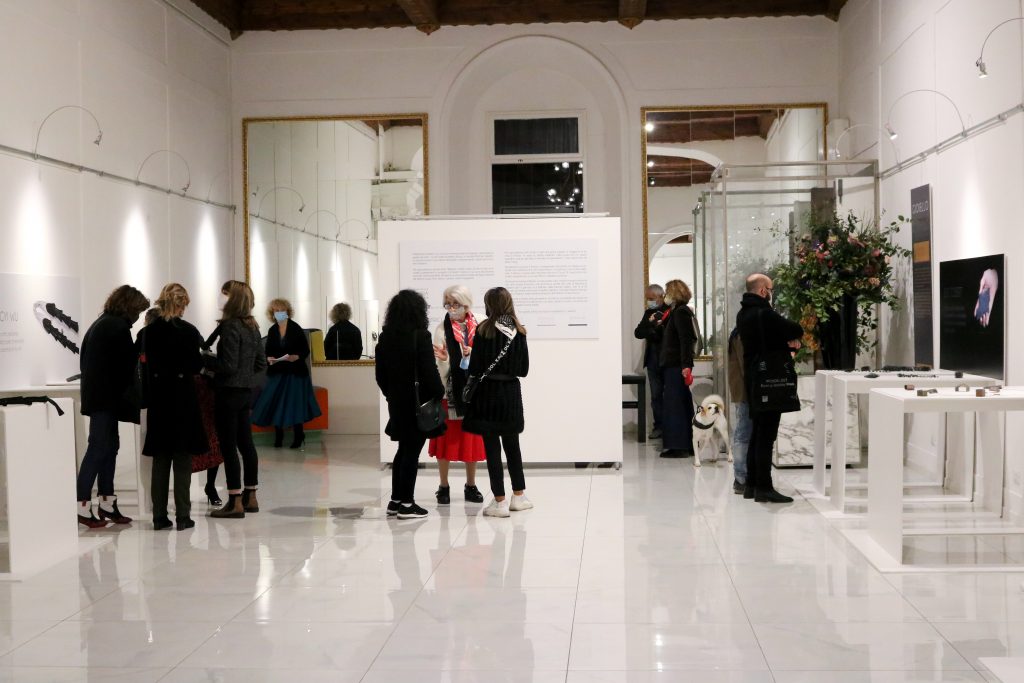 The exhibition, unfortunately ended early in Florence on 6th November, due to the pandemic emergency, offers the public disparate approaches to contemporary jewellery by female artists who have different training in the field and different geographical origin.
Despite the variety of research perspectives, it is possible to identify several underlying themes which define a certain ‘common sensation’, in the form of a concern shared by our protagonists. Precisely for that reason, the exhibition has been divided into 3 sections: PSYCHOLOGICAL, HYBRID and ETHICAL JEWEL.

Chia-Hsien Lin, Dongyi Wu e Zihan Yang in different ways address their own unconscious, digging, respectively, into the buried archive of memory, into the surreal aspect that mixes the wakeful state with dreaming, into the darkest and most contradictory depths of human psychology.
Lin tries to capture scents that make the wearer relive the emotion of a forgotten memory, while Wu offers enigmatic associations of images, creating large body ornaments that make us abandoning ourselves to a feeling of wearable fatigue.
Finally, Yang invites us to go on a journey of self-analysis, translating the darkest sides of our nature into a multitude of small oxidized silver elements that bundle up on the surface of her precious jewels. 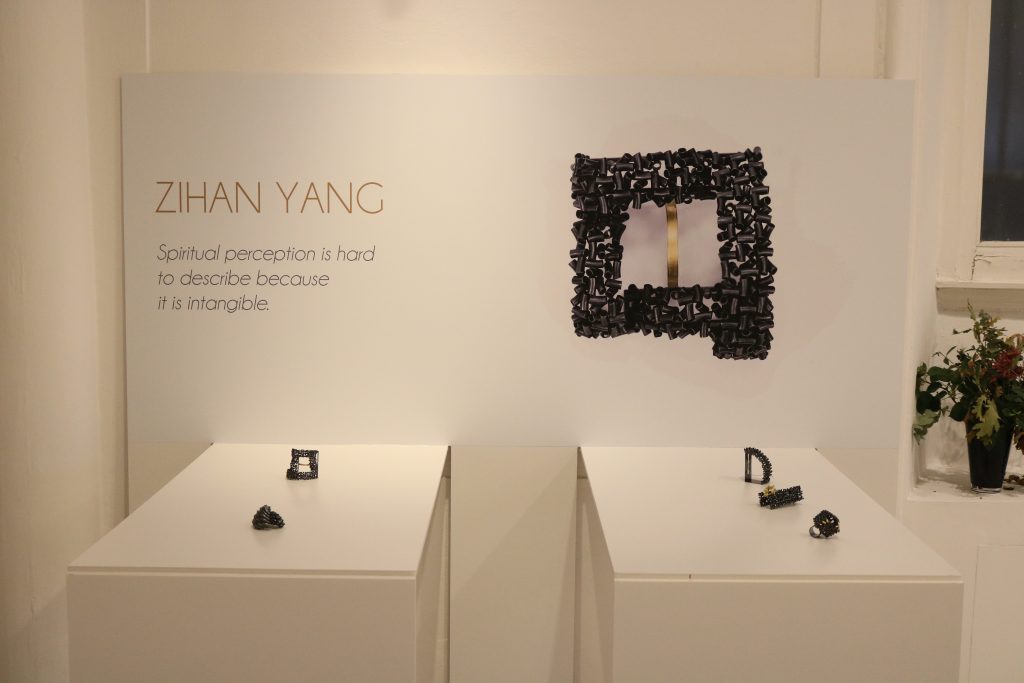 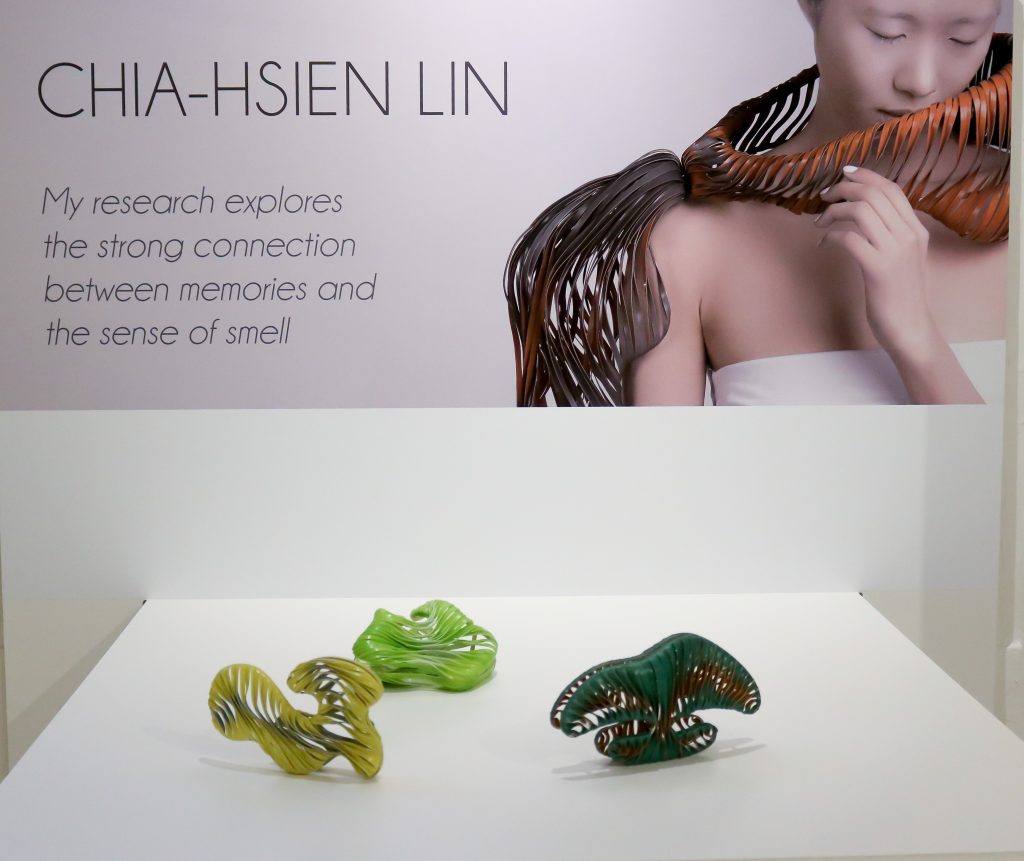 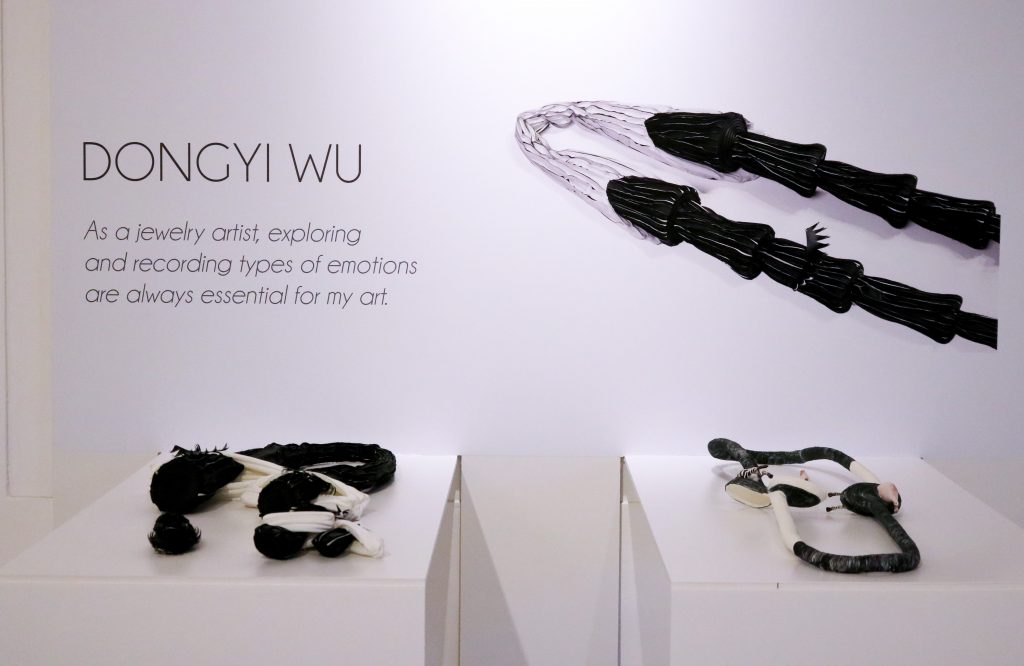 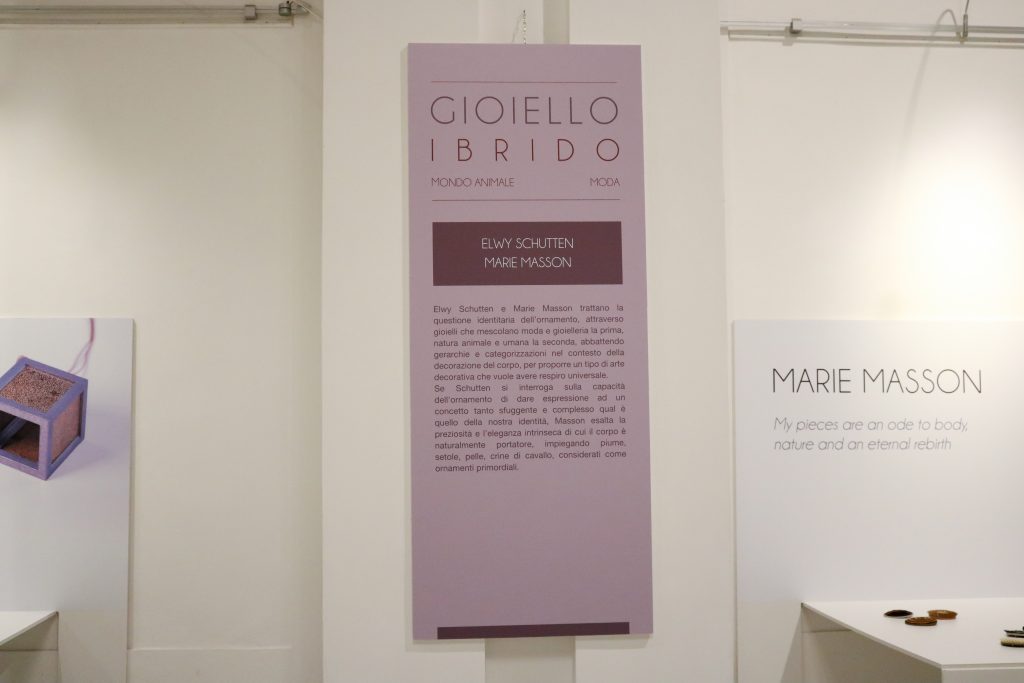 Elwy Schutten and Marie Masson reflect about the question of the identity in body decoration. If the former merges fashion and jewellery together, the latter mixes animal and human nature, breaking down hierarchies and categorisations in the context of decorative arts, giving life to a genre that aims to have universal breath.
Whereas Schutten questions the ability of ornament to give expression to a concept as slippery and complex as that of ‘identity’, Masson exalts the preciousness and intrinsic elegance of which the body is naturally the bearer, using feathers, paintbrush hair, leather, horsehair, considered as primordial ornaments. 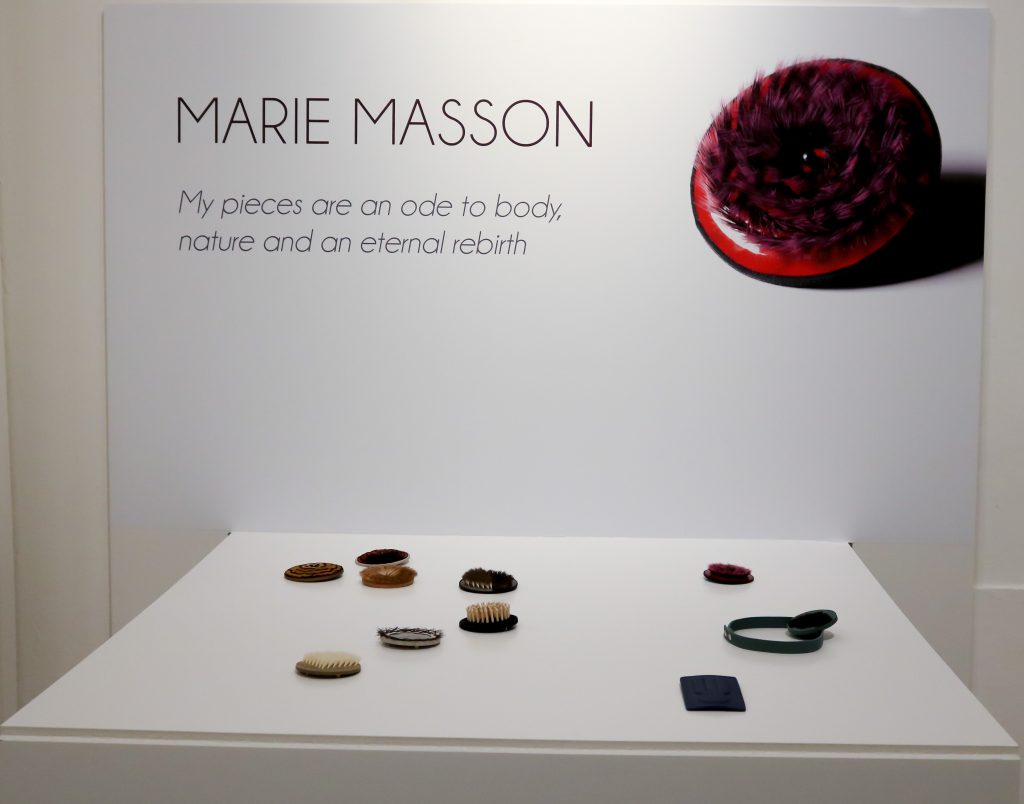 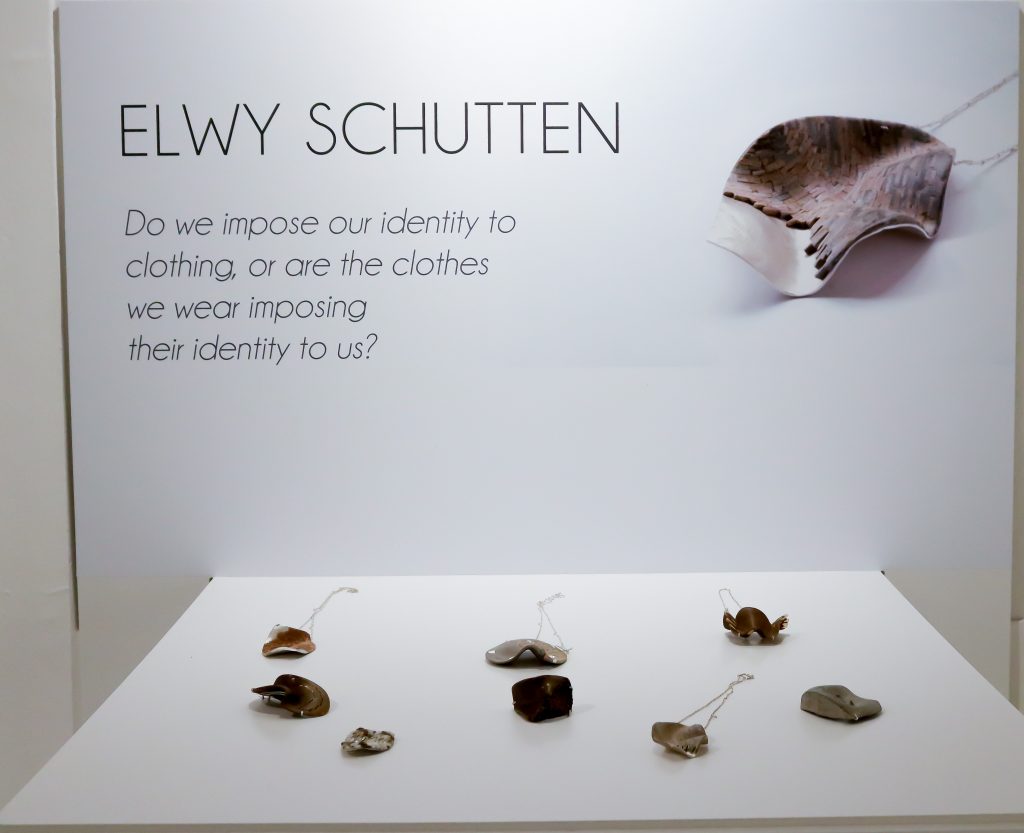 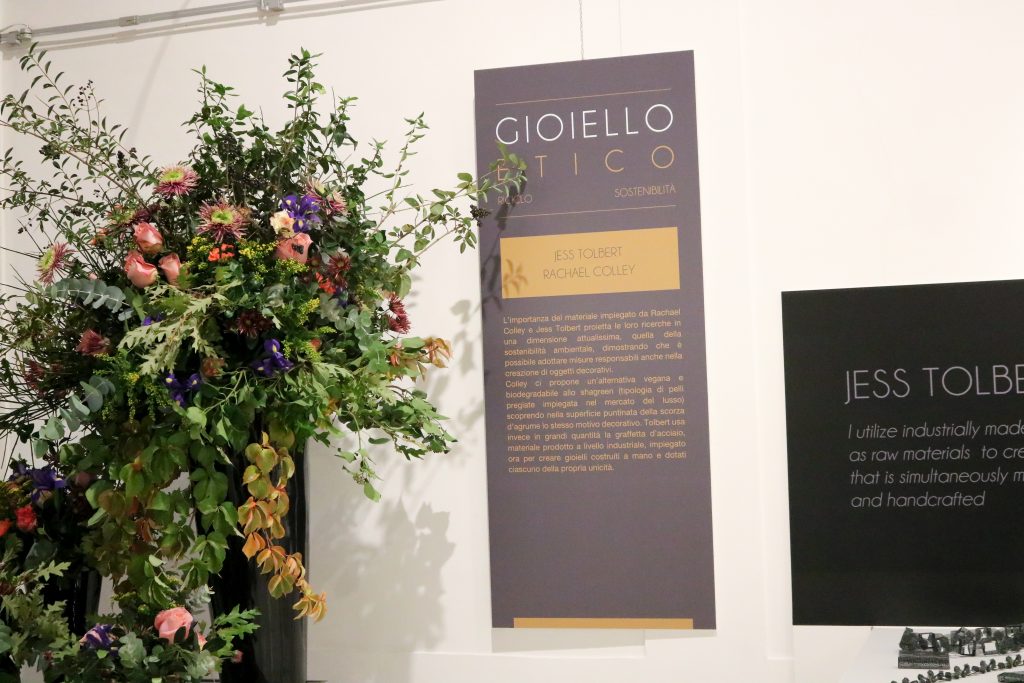 The centrality of the material used in the series by Rachael Colley and Jess Tolbert projects their research into a very topical dimension, showing us that it is possible to adopt eco-sustainable measures also in the creation of decorative objects.
Colley offers us a vegan and biodegradable alternative to shagreen (a type of fine leather used in the luxury market) by discovering the same decorative texture in the dotted surface of the citrus fruit peel. Tolbert, on the other hand, recycles the steel staple in large quantities, transforming an industrially product into handcrafted jewellery, where each piece has its own artistic uniqueness. 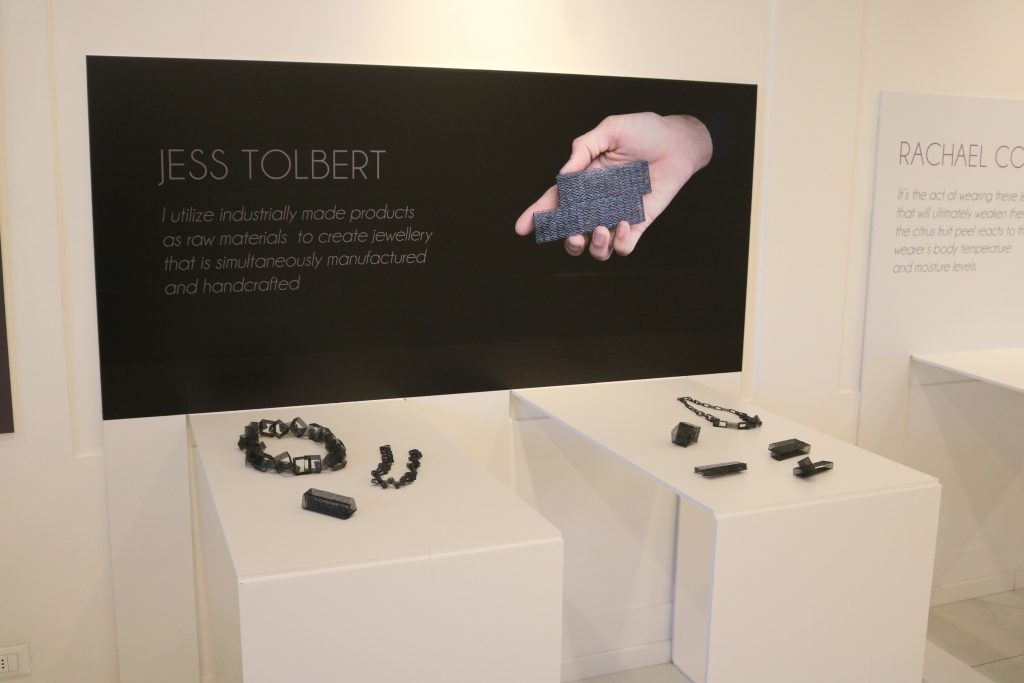 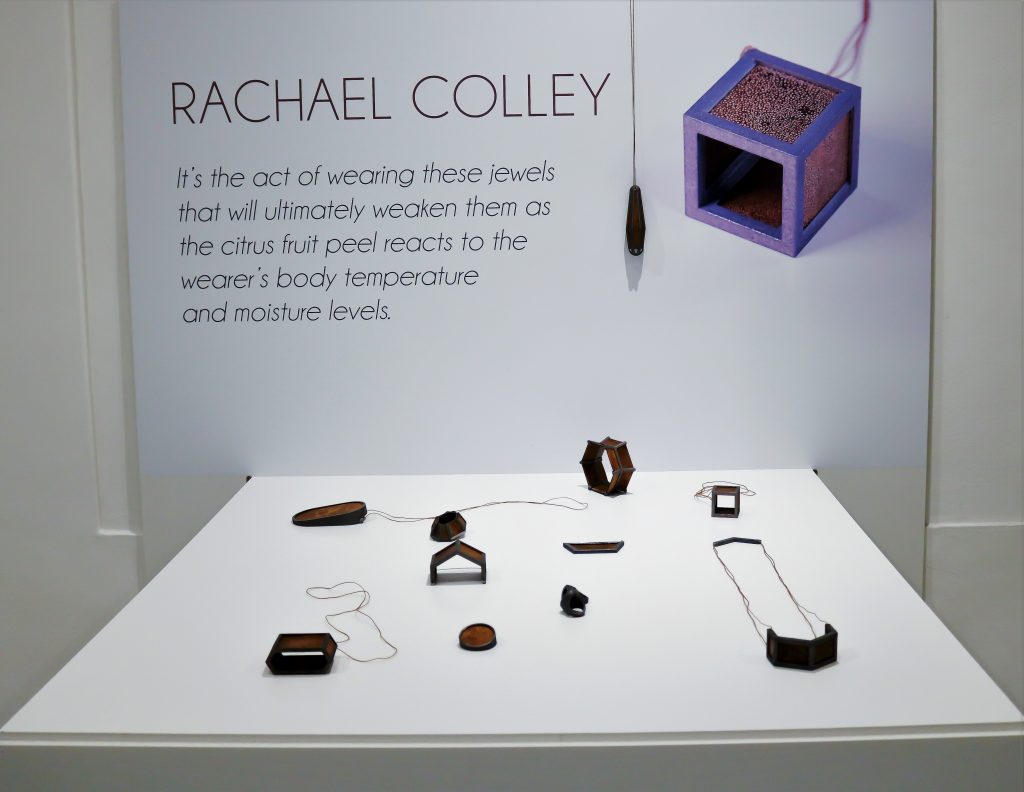 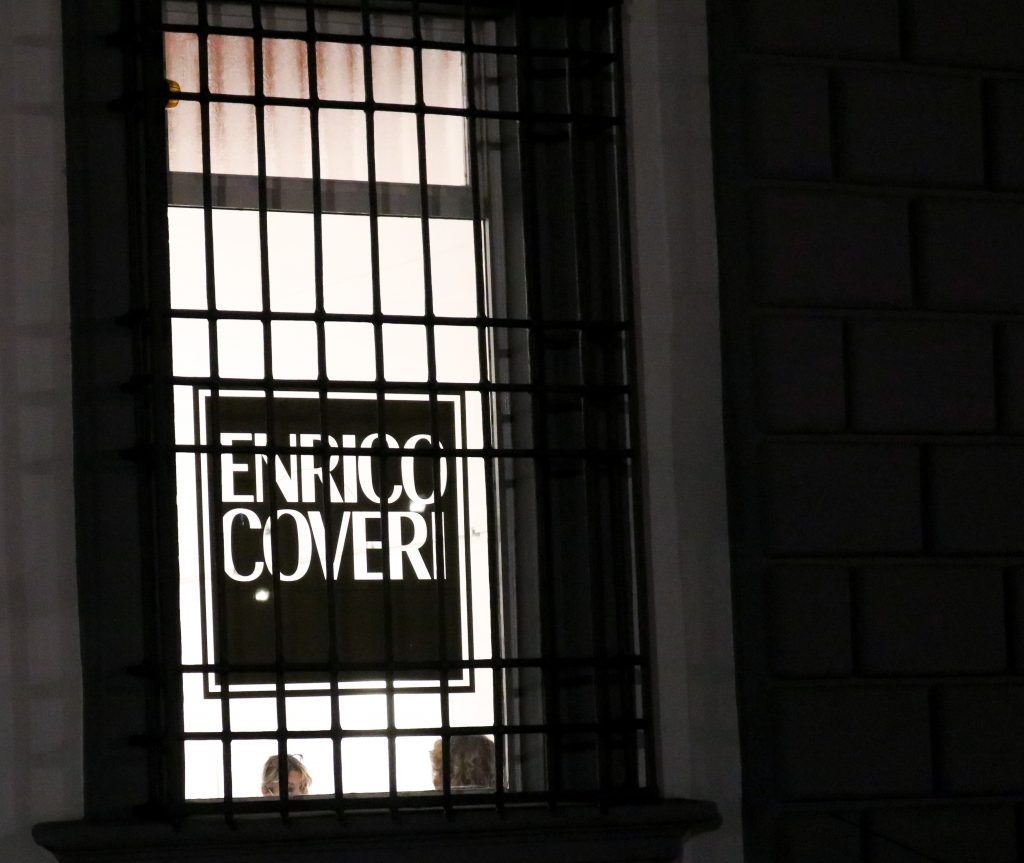