Little golden fishes from Macondo and other ancient wonders 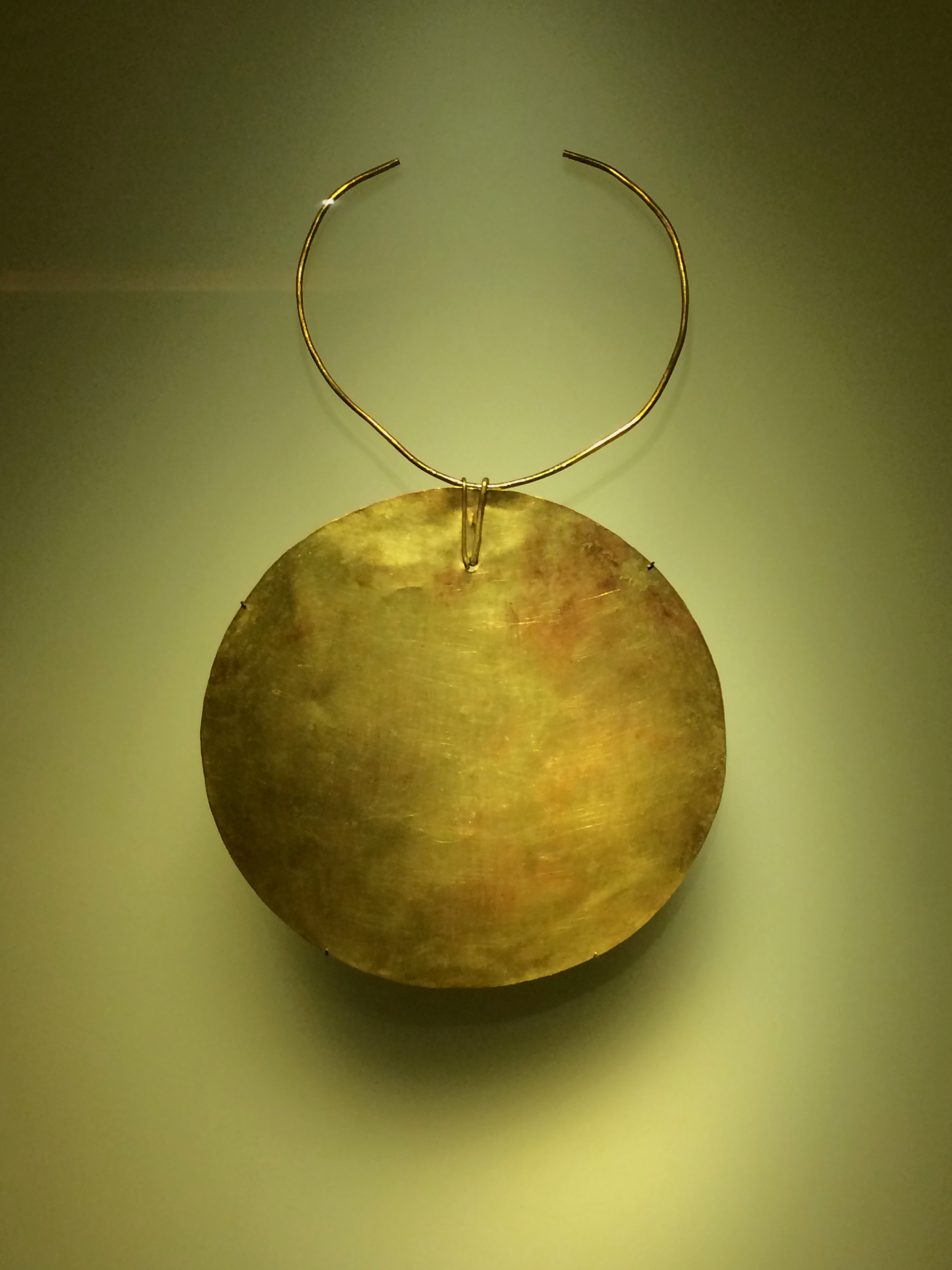 If it’s true that the forms of art are the direct expression of their own culture and time, what does the Pre-Hispanic Colombian metalwork tell us?
What are the meanings and the mysterious properties hidden behind the Quimbaya’s poporo, the Muisca Raft or the body’s ornaments in the shape of a jaguar-man or a bat-man? 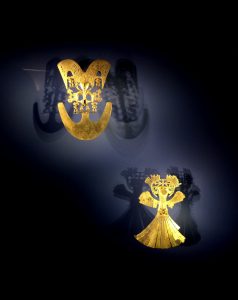 When metallurgy appeared in South America around 1.500 B.C., it quickly spread in the continent, flourishing in 500 B.C. throughout Colombia, until the destructive arrival of the Spanish conquistadores. The El Dorado myth, the legendary land of “gold”, became the main reason of their expeditions. In search of riches, the Spaniards discovered in 1537 the Guatavita lake, the magical site where the offering ceremonies took place, starting to empty it to find out its treasures, followed over the centuries by other gold diggers who caused its totally disappearance in 1911 (Viviano Domenici, 1981). 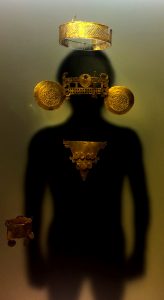 There, the Muiscas, the natives who lived in the Estern Andean Cordillera, periodically attended rituals for thank the Gods at crucial moments of the year, such as sowing and harvesting. These events called crowds of people who gathered around the lagoon to take part in the sacred event. The great chieftain and his following carried a big raft made of rushes in the middle of the lake and began to throw huge quantities of gold and precious stones into the water.
The chieftain, completely covered by gold dust, ended the ceremony immersing himself in the water, like the sun sets in the sea on the horizon, representing the cyclical flow of life. 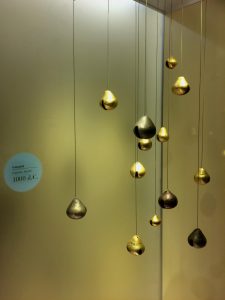 The ancient Colombian cultures were based on the eternal attempt to keep in balance the opposite energies that govern the cosmos. So, making offering and human sacrifices were ways to avoid cataclysms, famine and poverty, hoping for wealth and abundance.
Besides, natives knew that everything was taken from the earth had to be given back, “because for a new life to be created, another had to be sacrificed” (Marìa Alicia Uribe Villegas, 2016).  In the same way, the metalworkers’ trade symbolized the abilities of wise men to turn the earth resources into refined and shining objects that were tributes to the Nature itself. 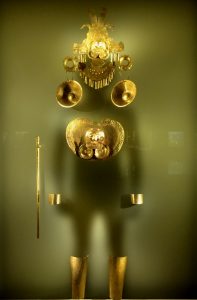 The famous pendant in the form of a little golden fish made by Aureliano Buendìa (the renowned goldsmith of Márquez’s One Hundred Years of Solitude) is just one of the various subjects that crowd the Colombian metalwork and pottery: we also find lizards, frogs, bats, birds, armadillos, chrysalises, …
Very common were also ornaments that depicted hybrid beings in metamorphosis, such as the frog-man, the bird-man and in general anthropomorphous or zoomorphous figures. Decoration not only had the property of measuring the worth that someone held in the social ranks of these hierarchical societies, but it even had the power to change his identity. In fact, when a shaman dressed up like an animal, with a long tail, ears, sharp claws, painting his body using rollers and stamps, wearing facial ornaments or masks, he immediately transformed his own person in that animal, acquiring its specific qualities and abilities. As Helen W. Drutt English and Peter Dormer stated in 1995, “Jewelry […] has a long history of being intertwined with people’s imagination”. Moreover, among these pre-Hispanic peoples, the body, with its abundant attire and decoration, had an active role in order to reinforce the strength ancestral connection between all the living beings.

The secrets of the universe became accessible thanks to the use of psychotropic and hallucinogen substances that made the “flight of the shaman” possible, who achieved metaphorically the higher wisdom and knowledge (M. A. Uribe Villegas, 2016). Widespread was the use of sacred plants that triggered the trance condition, such as coca, yagé, yopo. Above all, coca was the most preferred drug, because of its property in enhancing speech and overcoming hunger. Its leaves were roasted and mixed with lime from seashells, which were kept in containers named poporo. The stick inserted in these urns was highly decorated at the top with animal or anthropomorphic figures and it was extracted to bring to the mouth the alkaline lime powder. 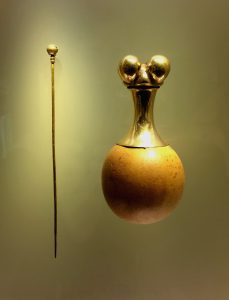 Poporos were mostly shaped in the form of phytomorfous urn, imitating marrows and corn cobs, such as the famous Quimbaya’s poporo, the first purchase of the Banco de la Repùblica, in 1939, which later led to the erection of the Gold Museum in Bogotà, in 1968. Today, it represents the biggest collection in the world that gathers the golden fruits of the Pre-Hispanic culture. Like a giant coffer of metallurgy treasures from all the region of the ancient Colombia, it houses about 50.000 pieces including jewels, ceramics and other historical artifacts. 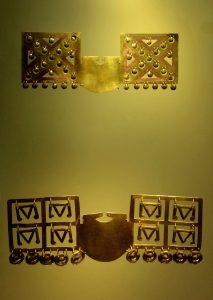 Saving the memory of a thousand-year old heritage from melting and oblivion, this magnificent institution of four floors preserves and studies the foremost role that metallurgy played in the everyday life of these ancient peoples. Disappeared cultures inhabited the cold high plains of the Andean Cordillera, the mangrove swamps of the Pacific Ocean, the warm coasts of the Caribbean Sea, each one attempting to pass down their knowledge to the future generations, to allow them to keep and take part in the mysterious equilibrium of the cosmos. 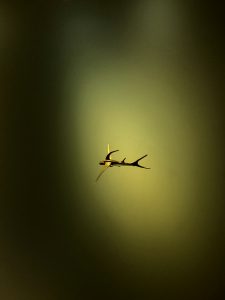