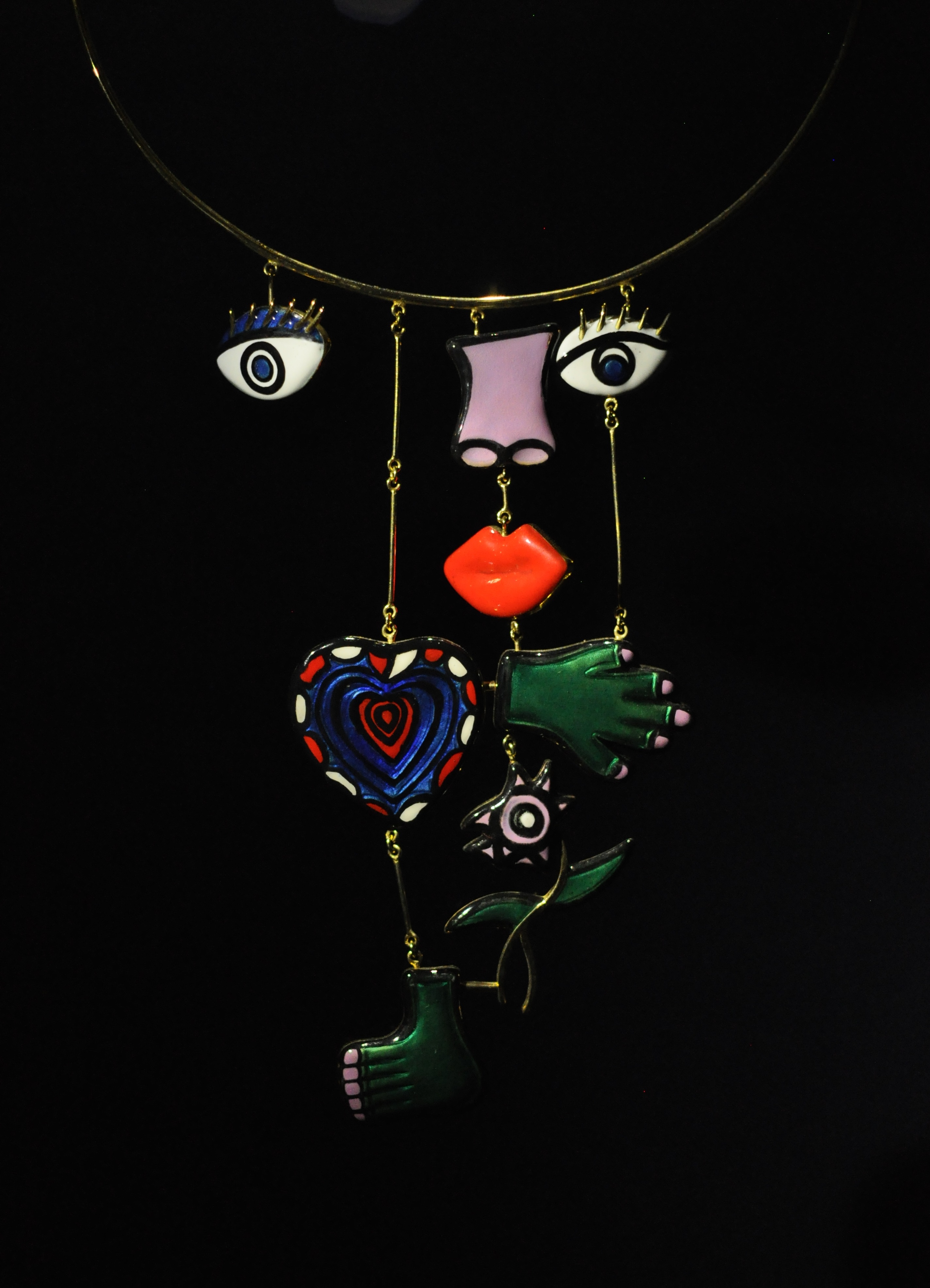 The magnificent vaulted rooms of Palazzo Ducale in Urbino host up until the 8th September a huge exhibition dedicated to jewellery designed or created by artists of national and international fame. The curator, Paola Stroppiana, has orchestrated around 140 pieces signed by 46 different artists who have ventured into jewellery as an alternative expression field to the research conducted in the plastic or pictorial discipline.
As the title states, the intention reached is to underline the fruitful conjuncture of the “major” and “minor” arts, which is once again realized in the spaces of Federico da Montefeltro’s Palace, in the sign of a rediscovered Humanism. 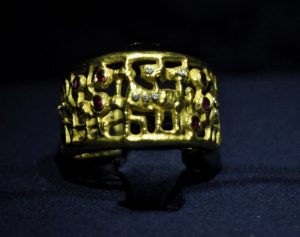 The jewels housed in the showcases, “set” in ephemeral apparatuses that cover the walls, are immersed in a suggestive, but perhaps excessive, semi-darkness.
Light effects emphasize the overhang of the architectural elements, tracing their plastic development, as in Antonio da Montefeltro’s sarcophagus.
Virtual and interactive projections try to capture the attention of the beholder, through the illusion of jewels that float in the air, shifting the focus on emotions like amazement and wonder which these objects can easily trigger…
Similar to that pursued by the promoters of this specific trend of ornament. 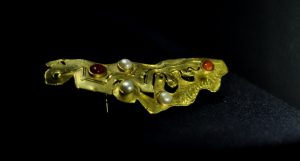 The main issue is, in fact, the difficult presentation of the “jewellery by artists” phenomenon, which has been as varied as complex, and reached its commercial peak in Europe and the United States between the 1960s and the 1970s. The foremost motivation declared by its promoters was the will to reinvigorate the forms of contemporary jewellery, whose expressive potential had to be reconsidered. 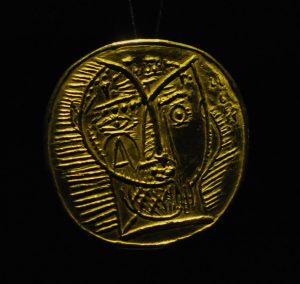 The signed jewel establishes itself as a wearable work of art, building a closer relationship with the body. Ornament allows new ways of artistic expression in which to perpetuate the study on the shape, on the surface, on the incidence of light, transposing the outcomes in a smaller space dense of movement’s stimuli.
Nevertheless, the risk is that of being a mere transcription, recognizable miniaturization of the author’s most famous masterpieces. Paraphrasing the words of the historical director of the National Gallery of Modern Art in Rome, Palma Bucarelli – the first in Italy who assigned public recognition to this art form – the artist’s stylistic code is however always recognizable because it comes from the “drawing”, so, in the reduced space of the jewel, it can find its most precise realization.*

In fact, as in the case of Pomodoro brothers, with whom the exhibition opens, the monumental practice often ends up trespassing in the gold-making and vice versa, giving rise to extraordinary contributions that enhance the decorative qualities obtainable through the wise use of the work tools, such as the cuttlefish bone.

Usually, these artists made only the project, but in some relevant cases, such as Gio’ and Arnaldo Pomodoro, they tried themselves in goldsmithing, with the help of professional craftsmen. Edgardo Mannucci and Nino Franchina worked with the blowtorch, Umberto Mastroianni and Giuseppe Uncini modeled the wax, Afro Basaldella and Franco Cannilla embossed and chiselled the metal sheet.

In the exhibition, the focus is about the leading characters of the famous goldsmith district of the Marche, dotted with centres of centuries-old importance. Giorgio Facchini and Alberto Giorgi, students of the great Edgardo Mannucci at the Fano Institute of Art, looked at the Informal’s matter research and later at the kinetic lesson, imposing themselves, like their master before, as great innovators of the nationwide jewellery.

Although some artists independently challenged themselves in metalworking – let’s think of the pioneer of artist jewellery, Alexander Calder, rightly present in this exhibition – jewelers and gallery owners played a fundamental and propulsive role in the success of that trend, which quickly spread in the international market. Buyers were art collectors, intellectuals, show business people, wore these signed items as an expression of their identity and interests.

In the hard times of the Second Post-War, the Roman jeweler Mario Masenza was able to intercept the future fortune of artist jewellery, followed, in the 1960s, by the goldsmith brothers Massimo and Danilo Fumanti, and by the Milanese GEM of Giancarlo Montebello and Teresa Pomodoro (sister of Arnaldo and Gio’).

Each of them brought together cenacles of renown or emerging artists of undoubted talent, who had the opportunity to try themselves in the field of ornament.
If in the luxurious windows of Masenza’s shop the emphasis was put onto the precious metals and gemstones of “unique pieces” signed by famous painters and sculptors, in the case of Fumanti, the opening to the nascent conceptual research led to the freer use of materials and the reinterpretation of the function of the jewel. Getulio Alviani, for example, with his Monorecchio (1967) in aluminium, seems to suggest a parabolic earring, which, like an antenna, captures the needs of others, predisposing the wearer to a strong sensitivity to listening. 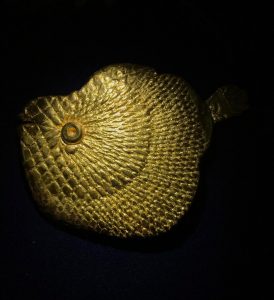 The novelty introduced by GEM MONTEBELLO was the renunciation to the “unique piece”, proposing instead the concept of industrial design, with the creation of jewels in limited edition. Personalities like Lucio Fontana, Piero Dorazio, Fausta Squartiti, Lucio Del Pezzo, Ettore Sottsass joined enthusiastically that lucky project. Then, Montebello expanded its horizon onto the vast international scene, inviting big names such as Niki de Saint Phalle, Pol Bury, Jesús Rafael Soto, Arman, César, Joe Tilson. As the Man Ray‘s Optic-Topic mask shows, just like the Pietro Consagra‘s Morso, not infrequently the jewels evaded ironically and provocatively the criterion of easy “wearability”, consequence of the irruption of the contemporary revolutionary spirit in the field of decoration.

Instead, experiences of individual collaborations with professional goldsmiths were those established between Salvador Dalí and Carlos Alemany, Georges Braque and the Baron Henry-Michel Heger de Lowenfeld, Pablo Picasso and François Hugo, Max Ernst and Pierre Hugo. With their expert help, these artists transferred into the gold the recurring figures of their imaginative universe.

Even though the experiences gathered for this great exhibition, that spans the entire second half of the previous century and reaches the present day, are different and diversified, the general spirit that emerges is a renewed interest for jewellery. Now the question is reopened by the intervention of contemporary artists, such as Anish Kapoor, Igor Mitoraj, Giulio Paolini, Enrico Castellani, encouraged by new figures of patrons, who put the spotlight, once again, to the harsh matter of the definition of “work of art”, even if it concerns the field of applied arts.