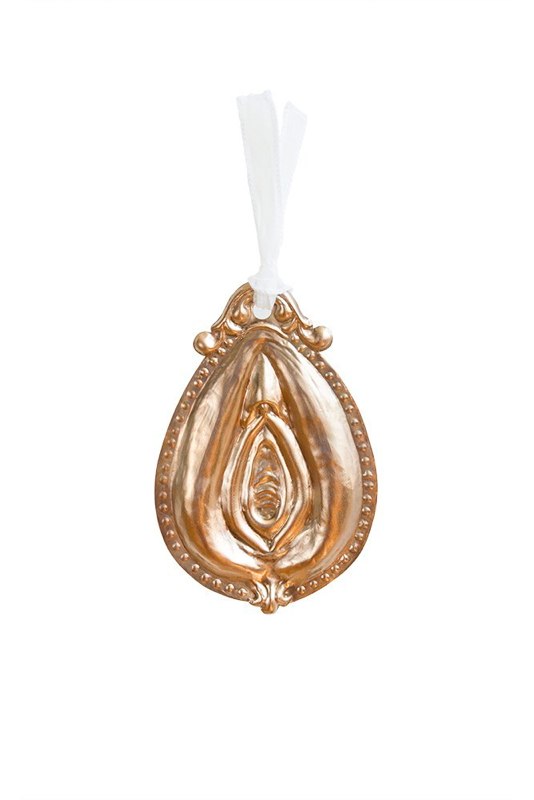 «The sad and disgusting can also be something beautiful»*

These the words of Hanna Hedman, a Swedish artist guest at Preziosa Young 2011 and again invited to the retrospective of 2014. Her Human Tree necklaces emanate an unsettling power, due to what they represent: rhythmic sequences of anatomical fragments, groups of running legs, dangling fingers, raised hands or strained ears. The compositions in oxidised silver and copper light up hot reds, which turn purple, then black, recalling the colours of the living or clotted blood. 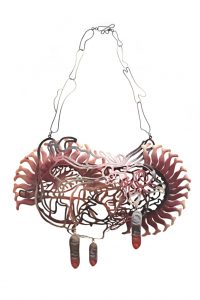 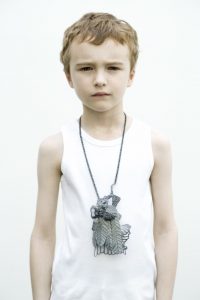 Hanna Hedman, What you say is not always what you have experienced, necklace, 2009, oxidized silver, copper and paint, courtesy of the artist. Preziosa Young 2014

The spirit of the supernatural seems to load these jewels. The allusion is to the Mexican Milagros, ex-votos in the form of small metal pendants, with which people give gratitude for the fulfilment of a vow. Otherwise, people wear them to ward off the evil, attracting on themselves benevolence and luck.
Hedman tells about the cultural history of man, based on myths, religious parables, folk tales, opening up to a new universe filtered by her eccentric imagination. The fragments of the human body become a way to celebrate life, investigated in its double aspect of incomparable beauty and extreme brutality.
Her jewels translate the conflicting human nature, which is at the same time weak and powerful, perverse and enlightened, unpleasant and admirable.
The long necklaces have their focal point in the centre of the wearer’s body, materialising his own experiences. They are overloaded objects, heavy as armour, but also perforated and light as the substance of the spirit. 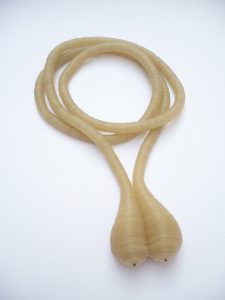 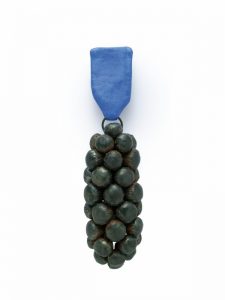 The Swiss Sophie Hanagarth, invited to Preziosa 2013, draws on a folk heritage, made up of superstitious symbols and lucky charms. It is possible to read her heavy objects, made of steel, in a dichotomous key of defence/offence against the public and especially against the wearer. Hanagarth’s jewels are disconcerting; they possess an aggressive sensuality. Their ironic vein is as disruptive as the message of female redemption: it becomes possible for women the conquest of something that by nature does not belong to them.
As the artist explains, this form of appropriation is evident in the testicles hanging at the neck, as well as the medal of shitty clusters or the rings To put on index, which alludes to military ornaments. The brave necessary to wear such jewellery is obvious in works like Trap, a bracelet that literally ‘bites’, or in Lipstick, rings which erotically suck fingers.

Hanagarth is closer to another younger artist, Lauren Kalman, for the similar assertive and energetic attitude that remixes and overturns the rules of the game. Kalman is an artist trained as a goldsmith and craftsman, who later comes to use all the forms of artistic expression, including photos and videos, to document her research in the field of adornment. She creates wearable objects, transforming her body at the same time into the subject and the object of the survey. The body is experienced in its gender and therefore in its sexuality, in which religion and taboos play a strong role.
In the Ex Votos collection, Kalman provocatively plays with the religious iconography, using gold as a symbol of eternity, of virginal purity, of the splendour with which the woman can adorn herself. The female and male sexual organs, explicitly shown, are presented as votive offerings. They assume power precisely because of their unveiled boldness, charged with the mystery and the prestige of gold. Rather than serving to glorify the divine, they finally celebrate themselves for what they represent.