What is the measure within which it is acceptable to talk about jewellery?
Can we define as a jewel that ornament which is so oversized, that goes beyond “wearability”?
These are the questions that arise when we look at some creations of contemporary jewellery. Artists investigate the physical space occupied by decoration, always interconnected with the wearer’s presence, with whom it establishes and triggers silent dialogues.

In the swirling colourful papier-mâché bracelets and necklaces by Marjorie Schick, exposed in Preziosa 2006, their uncomfortable portability is due to their dimensions. Egocentric catalysts of attention, they reverse the logic that, like jewels, they should act as enhancers of the wearer’s charm, and not vice versa. Their cumbersome presence, indeed, makes them principal actors of their autonomous existence.

In the sculptures by Naom Ben-Jacov, another artist who participated in Preziosa 2006, the jewel expands to the point when it engulfs the wearer. He finally becomes an actor of a performance in which he experiences the physicality and the transformability of metal cages or kaleidoscopic glass shells. The dancer establishes a “movement dialogue” with objects in steel, nylon or fiberglass, testing the infinite possibilities of a relationship of coexistence or impediment with them. He studies those structures by flexing and stretching them, or by entering and exiting them, moving with them and around them, leading to an increasingly interdependent trust effect. 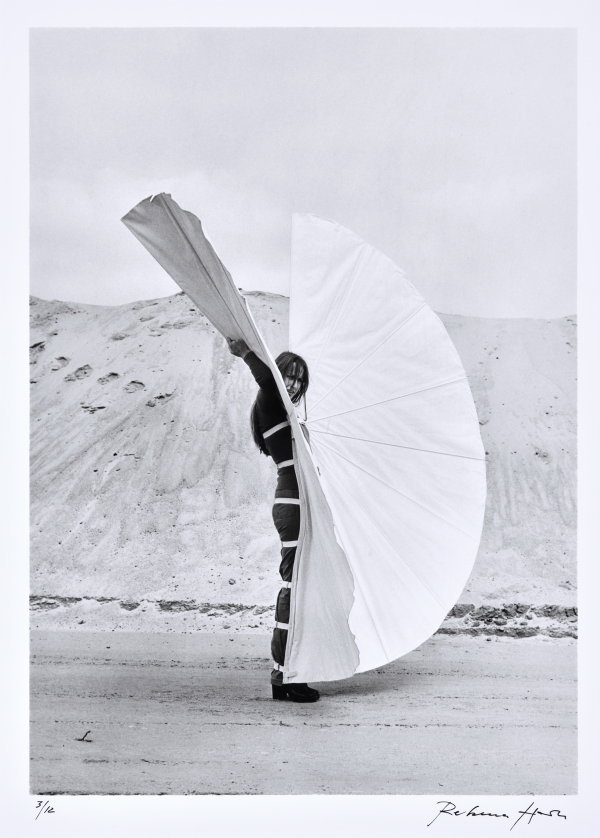 The issue of the body extension in the space, meant as the removal of its physical limits, has already been in the seventies the subject of Rebecca Horn’s research. This German body artist is known for her prosthetics, which she made to experiment artificial methods for the survey about the space, in an evolutionary vision of the human body.
Because of she used toxic materials without protections while she was student of the Academy of Fine Arts in Hamburg, she got very sick and was forced into a sanatorium for a year. As she told, she felt so isolated that become urgent for her to restore a physical contact with the surrounding space. That need led her to conceive showy extensions of the limbs, grafted on the body and fixed by wrapping costumes. In that way, those wereable creations allowed to go beyond those boundaries that naturally delimit human potentialities.

The theme of the mutant body and of the aesthetic transformations is the central issue of Cristoph Zellweger‘s research. He gives expression to the innate human desire of self-optimisation that the world of modern surgical technology makes ever more possible. The Swiss artist, who attended Preziosa 2006, is interested in how the natural need of man to decorate and beautify the body, changes over the time, with the progress of medicine.
When a ʻlackʼ is identified, plastic reconstruction correct and repair. For that reason, he applies the materials used in the operating room, such as medical steel, simulating prostheses employed in the surgeries to reconstruct damaged parts. He uses also expanded polystyrene to create those anatomical body fragments more frequently subjected to cosmetic surgery. The artist is interested in those that are considered remedies to the achievement of a canon of ideal beauty. Zellweger wonders how the jewel can be replaced one day, not so far, by futuristic cutaneous implants of artificial intelligence devices, and how they will become part – as already jewellery, tattoo or breast enlargement – of a new concept of aesthetics.